Since Spirit jailbreak release is on the horizon, it is time to save your SHSH blobs so that you can jailbreak (by downgrading) your device again should Apple release a new firmware once the exploit is public. The following two paragraphs explains what are SHSH blobs and why is it important to save them now.

So first up, what exactly is SHSH blob or ECID SHSH? Well, it is basically is a unique signature which is checked against Apple servers whenever you decide to restore the firmware on any of your iDevice (iPhone, iPad and iPod touch). Once a new firmware is released, Apple stops signing the older firmware, hence making it impossible to restore back to the older firmware from iTunes.

Now to “why is it important to save SHSH blob”: The creator of Cydia has setup a new server which basically mimics Apple’s verification server and can save your older signature (SHSH blob) so that you can downgrade or restore back to the older firmware. This is important because if you don’t have your SHSH blob saved, and accidently update to new firmware, you’ll loose your jailbreak and furthermore, you wont be able to downgrade back to older firmware to re-jailbreak your device.

Since Spirit is a userland jailbreak, the exploit it uses is very likely going to be patched in the form of new firmware. It is important to save your iPhone / iPad / iPod touch SHSH blobs now so that you don’t loose the ability to downgrade (and re-jailbreak) your device should you accidently upgrade.

There are number of ways you can do this. You can either use AutoSHSH, Firmware Umbrella or directly go through saurik’s server. The following guide uses AutoSHSH to save SHSH blobs of iPhone, iPad and iPod touch.

Step 2: Start the program and plug in any ONE of the iDevices (iPhone/iPad/iPod touch) in recovery mode. To do this, turn off your device and hold down the “Home” button while connecting the USB cable until you see “Connect to iTunes” message and logo on your iPhone. 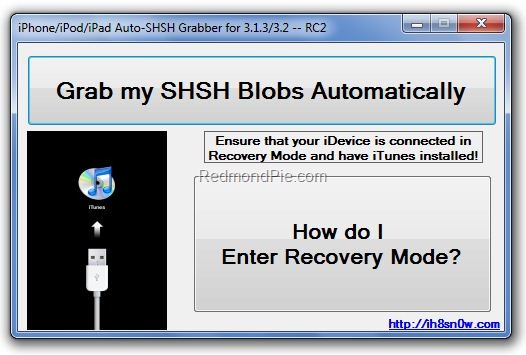 This is it ! You should all be safe now. Spirit jailbreak release is imminent now. Make sure you save the signature for your iPhone, iPad and iPod touch on file before Apple releases the next firmware.

UPDATE 1: Spirit Jailbreak tool has been Released. You can jailbreak all iDevices including iPhone 3G/3GS, iPod touch 2G/3G and iPad on OS 3.2. iPhone unlockers should stay away!

UPDATE 2: Mac OS X guide is up now! Follow the instructions posted here to save your SHSH blobs using Firmware Umbrella on a Mac.