According to the sources at TechCrunch, HP has dropped Windows 7 + Intel based hardware for its ambitious tablet project because “It’s too power hungry”. This news, which is yet to be confirmed by HP comes only a few hours after it was confirmed that Microsoft Courier Tablet wont see the light of day. 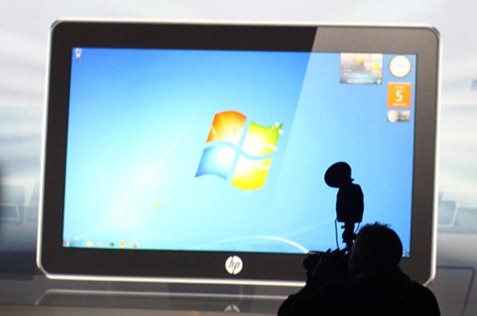 If this turns out to be true, then it will leave a big hole for PC manufacturers and specially Microsoft to fill as Apple iPad will now continue to dominate this niche market without having any major competing device in this form factor. I have been saying this for month and will repeat my statement again. Microsoft needs a Tablet which is based on the new Windows Phone 7 OS (something on the lines of this concept). Because lets be honest, the current (client version) Windows 7 wasn’t initially designed to be a touch friendly mobile OS. It was designed with keyboard + mouse input devices in mind, just like how OS X has been.

The sources at TechCrunch have also been told that HP Slate may debut again in late 2010, or sometime next year running Chrome OS or Android. HP may also bring WebOS to this market after they bought Palm only a few days ago.

In January this year, Steve Ballmer in his keynote at CES 2010 unveiled the HP Slate PC running Windows 7. The device was suppose to go retail in summer of this year. [via TechCrunch]