Google to Take on iPad with Chrome OS Tablet

The year 2009 can rightly be dubbed as the year of Netbooks. Almost every company from the technology world launched its own brand of Netbook into the world computer markets. The year 2010, on the other hand, started altogether on a different pace. Right at the break of the year, on 27th of the first month, Apple welcomed the new year with its mysterious product, iPad. This unique product, Apple Tablet was already talk of the town for last few months. After the unveiling of iPad, we now see a flood of rumors that are breaking out about various brands of Tablet every other day. Among these, HP Slate of Microsoft and Tablet from Google are the hottest in the rumor world. Year 2010, no doubt, will be the year of Tablets. 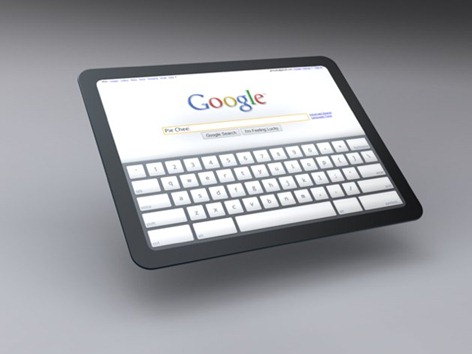 The latest of these rumors in air, are about Google’s Tablet that Google might be developing in response to its rival product, the Apple iPad. The rumor further gained strength when an engineer at the search company posted a video online showing a mock-up of the Chrome operating system running on a tablet computer. Google without making much of hue and cry, quietly posted some photos of their device. The short but smart Chrome OS concept video released, interestingly shows browser windows that are being treated as objects and can be easily and readily manipulated on screen for the best use possible depending on the site you are at. It shows how both sides of a single, large screen could be used simultaneously to carry out computing tasks, such as writing emails and searching the web.

In the demo video, one can vividly see that multi-tasking will certainly be there on the Google Tablet. This sole factor alone may become one of the major selling point for a Google tablet as against its competitor iPad  in World Tablet PC market as it will be able to carry out more than one task or process simultaneously. Here you can see for yourself, what a Google Chrome OS based tablet may look like. Glen Murphy, the Google Chrome’s designer, posted this UI concept video along with some images on Google’s official Chromium site:

A word of caution, don’t get too much carried away by it. Just keep in mind that above is a mock up based on rumors. What we actually get at the end as Google Tablet, may entirely be a different device altogether. [via Gizmodo]