Gizmodo today took the wraps off the new “secret” Tablet PC concept that Microsoft has been working on. Currently called as Courier, it boasts off dual 7-inch multitouch capable screens which is designed to work with both multiple fingers-input and stylus. 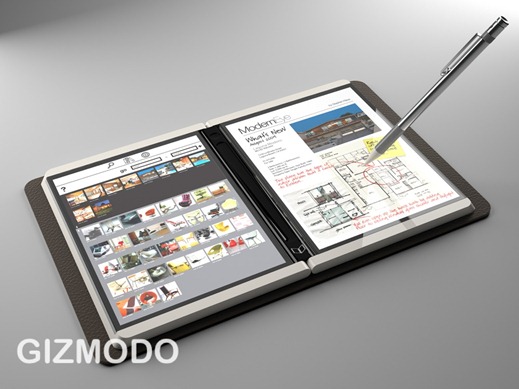 Courier is a real device, and we’ve heard that it’s in the "late prototype" stage of development. It’s not a tablet, it’s a booklet. The dual 7-inch (or so) screens are multitouch, and designed for writing, flicking and drawing with a stylus, in addition to fingers. They’re connected by a hinge that holds a single iPhone-esque home button. Statuses, like wireless signal and battery life, are displayed along the rim of one of the screens. On the back cover is a camera, and it might charge through an inductive pad, like the Palm Touchstone charging dock for Pre.

Courier which is said to be in its late prototyping stages looks incredible already! I hope Microsoft drops this before the rumored Apple tablet which is taking forever to happen. If Courier works as it is demonstrated in the video above then I’m surely sold to it. Let us know what do you think about it and whether or not you will prefer it over the rumored single-screen iPhone-like multitouch capable tablet which Apple is said to be working on.