A trusted source has informed Engadget about the upcoming Microsoft’s Courier tablet/e-book device which was first surfaced back in September last year. With just under an inch thickness and weighing a little over a pound, Courier is designed to function as a "Digital Journal". It is going to feature a dual 7-inch multitouch capable screen which will be designed to work with both multiple fingers-input and stylus. 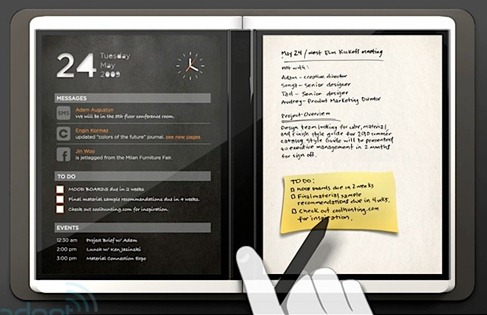 Courier is rather smaller than expected with a size, similar to that of a 5 x 7 photo when closed. The main emphasis is on mobility and portability. The source has also revealed that Courier is built on Tegra 2 platform and runs on the same OS (based on Windows CE 6) as the Zune HD, Pink phones, and Windows Phone 7 Series devices.

As far as the user interface/experience is concerned, the device is said to be pen-based and will be mainly centered around drawing objects and writing. Courier will also feature a built-in camera and a headphone jack for media playback. There will also be a dedicated eco-system centered around reading ala iBooks for iPad.

Here is a small video which shows off user experience of Microsoft Courier:

One thing which is interesting to note here is that all these rumors regarding Courier has popped up the same day when Apple has announced the release dates for WiFi version of the iPad.

Microsoft Courier is shaping up as a great product, but don’t you think that with an expected release date of Q3/Q4 2010, it will be too late for it to catch the iPad which is going to be available for pre-order starting next week? It will also be interesting to see how Microsoft strategically places Courier with HP Slate, which unlike Courier, is going to run on Windows 7. [via Engadget]