Sad news for quite a lot of people, including us. The Microsoft Courier Tablet won’t go into production and has been confirmed by Microsoft itself that they’re pulling the plug on the Courier Tablet project. 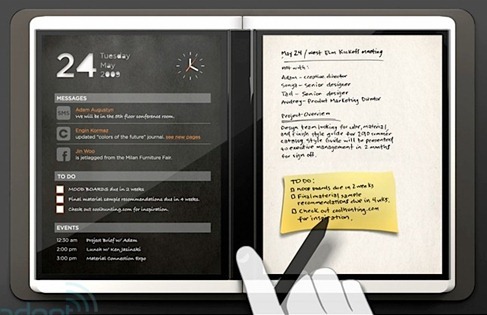 We had so much hopes from the Courier Tablet, the idea was just brilliant. Imagine you would never have to carry a journal with you again, but sadly we won’t see the Courier ever! Gizmodo contacted Microsoft and inquired them about the Courier. MS confirmed that the Courier won’t see the light of day, this is what Microsoft’s Corporate VP of Communications Frank Shaw told Gizmodo.

At any given time, we’re looking at new ideas, investigating, testing, incubating them. It’s in our DNA to develop new form factors and natural user interfaces to foster productivity and creativity. The Courier project is an example of this type of effort. It will be evaluated for use in future offerings, but we have no plans to build such a device at this time.

Well, that sums up everything quite clearly, Microsoft has put the soil over Courier. But it’s a really nice concept, a tablet that resembles a journal, a spectacular dual screen design, wouldn’t been great if it went into production.

But still we feel that Microsoft won’t totally bury the Courier under the dust, maybe we’ll see something similar running Windows Phone 7 (like this concept). Who knows, let’s see if Microsoft has other plans up it’s sleeve or not. For now, Microsoft should better hope that HP Slate (powered by Windows 7) doesn’t look as lame in comparison to Apple iPad when it ships this summer. [via Gizmodo]