Apple has just released the first developers preview version of iPhone OS 4 Beta, along with SDK for iPhone and iPod touch. Only members enrolled in the iPhone Developer Standard or Enterprise Program can access these bits of iPhone OS 4 and SDK by signing into Apple Developer Connection. 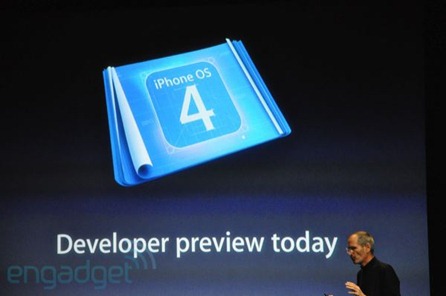 Earlier today, Apple unveiled the new iPhone OS 4 firmware in a preview event, held at their 1-Infinite loop campus in Cupertino. This announcement added lots of new features for both users and developers alike. iPhone 4 SDK includes lots of new API improvements, features and bug fixes. The complete list of features can be found here.

iPhone OS 4 will be fully supported on iPhone 3GS and iPod touch 3rd gen. And, for iPhone 3G and iPod touch 2nd gen, they will run many things, but not multitasking. An iPad version of iPhone OS 4 is expected to be released this fall.

UPDATE 1: Just grabbed these filenames for the official .ipsw files for iPhone OS 4.0.

UPDATE 3: Jailbreak iPhone OS 4 with Redsn0w 0.9.5 is here. Step by step instructions can be found here.