When we talk about touchscreen-only Tablets, the first device that pops up in mind is the iPad. It is an awesome device in many ways, provided that you find some good use for it. When iPad was launched earlier this year, it was pushed as a device to innovate the way we use our computers, just like what iPhone did with smartphones back in 2007.

The popularity and success of iPad naturally spawned many different manufacturers to bring similar devices to market. There was the JooJoo, the now dead HP Slate, Dell Streak and tons of other Android based devices. But none of them could proved to be a serious challenge to Apple’s offering. Samsung recently announced the Galaxy Tab, an Android 2.2 tablet which is getting lots of attention in media for being the only tablet that can give iPad a serious a run for its money. 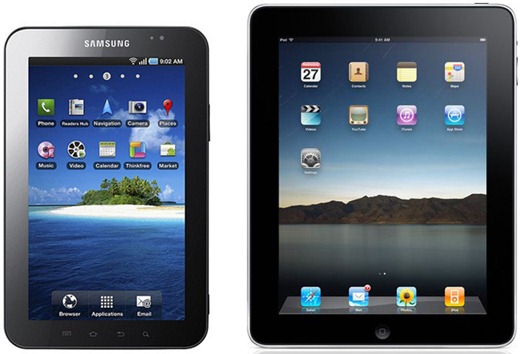 Below is a quick showdown between the two touchscreen-only tablets, showing how the more popular iPad stands against the yet to be released Galaxy Tab. 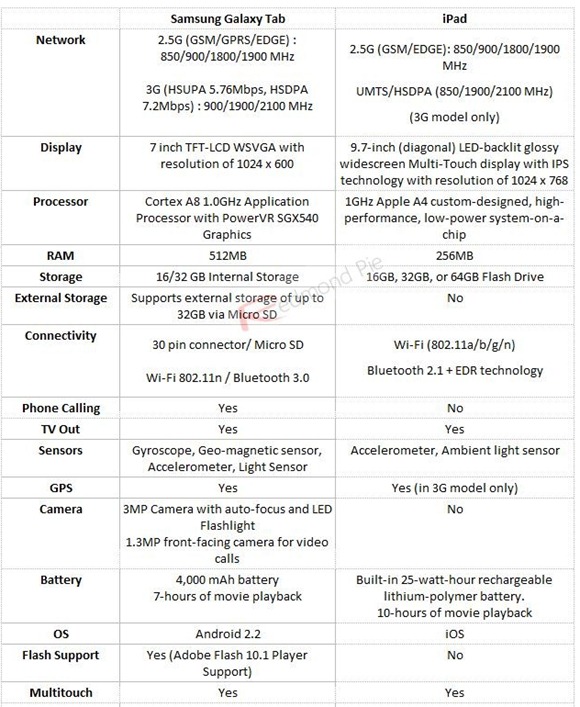 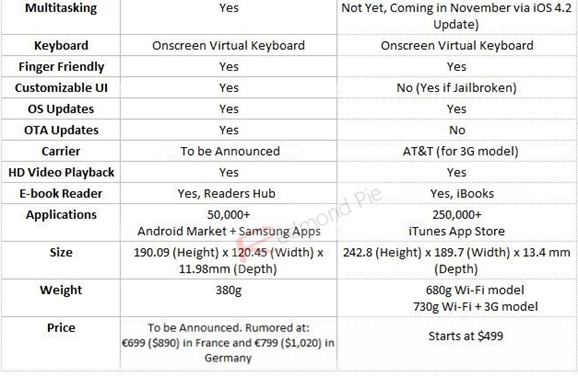 Galaxy Tab’s specs above sure looks impressive, but can this 7-inch device be even qualified as a touchscreen-only Tablet? To me, the fact that you can easily hold it in one hand, make phone calls with it, and take picture on the go makes it more of a one big ass smartphone than a Tablet of iPad class, which should probably be competing with the Droid X, HD2 or the EVO 4G and not the iPad. Yes, the front-facing camera for video conferencing makes sense, and this is probably something Apple should have included with v1 of iPad but then again, iPad is slated for a hardware revision early next year and is very likely to get iPhone 4 like FaceTime video calling feature. The rear camera on the other hand seems completely pointless to me because I don’t think people would like to take photos with a 7″ digital camera.

Coming to the user experience, which is extremely important for a Tablet device of this kind. iOS for iPad is optimized for larger, more spacious screen of iPad. If you have ever used an iPad you would know what exactly I am talking about here. Android 2.2 in its current iteration isn’t ready for large screen devices yet. It is primarily a phone OS which has been forced to do a Tablet job, just like those Windows 7 Tablets with custom UI shells on top. And so to hide Android’s deficiencies, Samsung has come up with a large screen version of TouchWiz custom UI which is also found on their Galaxy phones. This new version of Samsung’s TouchWiz UI (for Tab and Galaxy S) in my opinion is an iOS knock-off, and it has this “iPad/iPhone for Kids” look and feel to it which makes the device look more like a toy for kids, than a serious gadget.

Multitasking on Galaxy Tab shouldn’t be a big deal because by the time you get Tab in your hands, iPad will have all the multitasking goodness as part of iOS 4.2 release in November.

Last but not the least, the sheer number of quality iPad only apps in the App Store compared to the unmonitored crappy mess in Android Market for different Android based devices, the higher price point of Tab (rumored to be between $800 to $1000) compared to iPad etc. only makes iPad a much better value for money than any of the competing devices out there.

Let us know what do you guys think about this. Would you chose an Android Tablet over iPad? and if so, why?