I was going through YouTube this morning when I came across this video showing a comparison between a Windows 7 based Slate PC and an Apple iPad. What was surprising for me was how in some places the Windows 7 based “Hanvon” Slate did better job than its iPad counterpart – Internet Explorer 8 was faster to load pages than Mobile Safari, the YouTube web app on Windows 7 was certainly loading videos much faster than the native YouTube app on iPad and so on. 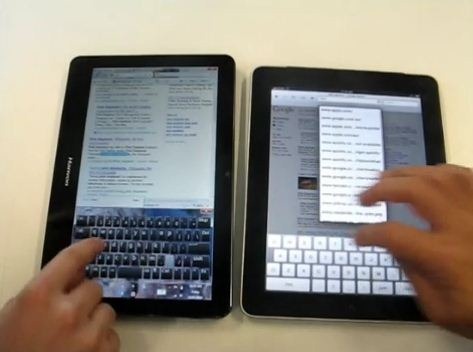 But for Microsoft, the biggest challenge which still remains is the fact that Windows 7 is still a desktop OS being cramped on to a large touch-screen device. This in my opinion is a deal breaker for many. You can see some of these  these shortcomings in the video, for example: Writing an email in Outlook (desktop version) vs the touch friendly Mail app on iPad.

At the Microsoft’s annual financial analyst meeting last month, Microsoft CEO Steve Ballmer made it very clear that Microsoft is serious about this market and that they are working with their hardware partners to bring Windows 7 based Slate computers as soon as this fall. Now the big question for us the consumers is: Will you rather prefer to carry your familiar desktop experience with you on a large touch-screen device (the Microsoft strategy), or you want a complete touch friendly OS, which obviously is different than what you have on your desktop on a large touch screen device (the Apple strategy). Check out the video embedded below and let us know your answers in the comments section below.