The Steve Ballmer iPad Review that You Don’t Want to Miss! [Video]

We just stumbled upon a video on YouTube by 1938digital in which “fake” Microsoft CEO Steve Ballmer reviews the latest revolution of Apple in his very own trademark style. In his review, Ballmer explains why the iPad sucks, and how a new Microsoft Tablet with Windows 7, Windows Mobile, Azure, the Cloud and God knows what else is going to rule this market. 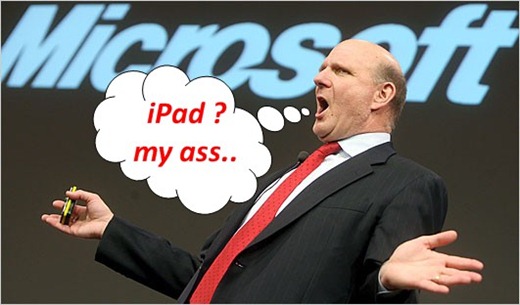 The video is hilarious, and is a must watch!

The full script of the iPad review is as follows.

Hi.. Steve Ballmer from the Microsoft Corporation with an iPad review.. Are you kidding me.. this thing is an etch a sketch.. How many times you gonna be bent over from that yoghurt eating, sandal wearing guru? it’s ridiculous! He releases a tablet without multitasking? Wait till I flood the market with a thousand of these things.. It’s gonna have Windows 7.. Windows Mobile.. Azure.. the Cloud.. It’ll have everything! Try opening an app on this thing and listen to some music.. Back and forth.. Back and forth.. Back and forth! No multitasking.. No multitasking! Are you kidding me? How do you have this much real estate and I still have to hit “Shift” to type a number? It’s idiotic! No flash.. No Farmville.. No porn.. No sports.. Now I know why Steve calls it Safari.. because its a hunt to find a website that works on this thing.. What is it with him? I thought that him and Adobe were friends.. they go back a long time.. Is there anybody that this guy won’t try and screw? When is enough? I thought we were the bad guys.. Jesus! Can you pick a more close system? Talk about screwing developers.. Developers Developers Developers! These guys make the Google twin idiots look like geniuses. Scoble’s all happy he waited 22 hours in line to get one.. Christ that guy is an idiot! So glad I got rid of him.. How do you not put a camera in this thing? How am I supposed to see Martin on chat roulette? Steve Ballmer from the Microsoft Corporation with an iPad review.. This thing blows!!

I couldn’t stop laughing when I saw this one, amazed how we missed it on YouTube though. it’s funny how “fake” Ballmer rants about the iPad not having multitasking, no Flash, no Farmville, oh and no p0rn too. The best part in the video was when Ballmer explains the reason why the Apple web browser is called Safari? “because its a hunt to find a website that works on this thing”. Let’s see how the “fake” Steve Jobs responds to this one. [via YouTube]