ASUS Eee Pad is a Windows 7 Tablet that Can Give iPad a Serious Run for its Money!

After HP pulled the plug on Slate PC, we knew someone else would hitch a ride to bring Windows 7 powered tablet PCs back on track. Though ExoPC took an initiative, but ASUS has jumped on this bandwagon with a bang with their Eee Pad which boasts an Intel CULV processor, an amazing 10 hour battery life with Windows 7 on top! 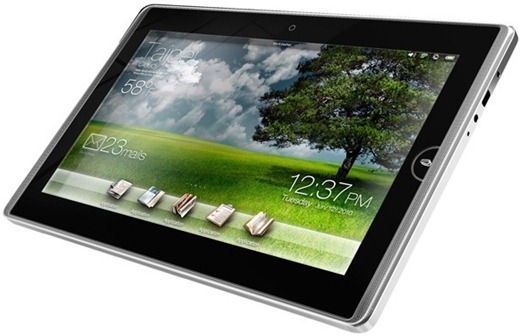 ASUS Eee Pad will come in two varieties: the 12-incher running full-blown Windows 7 desktop OS underneath with an Intel Core 2 Duo ultra low power CULV processor, and the 10-incher running Windows Embedded Compact 7 with NVIDIA Tegra in its back. The form factor and everything else will almost remain the same. Both of these devices will give 10 hour of battery life (like iPad), and will feature webcams on the front for video chatting/conferencing. They’ll also feature USB ports for connecting other devices with the Eee Pad.

Here is a video of both the models in action from Computex.

Asus has announced that the price will range from $399 to $499, which we think is quite awesome for a tablet PC of this kind! But unfortunately, we won’t be able to get our hands on the Eee Pads before first quarter of 2011. So hold your horses for now on this one.

We would love to see how the two ASUS Eee Pads takes on the iPad, and the other Android/Chrome based tablets coming in late 2010 or early 2011. Will you prefer one of these over Apple iPad? Let us know in the comments section below. [via Engadget]