We were really willing to see the HP Slate PC in action but sadly HP pulled the plug on it, stating that Intel’s hardware is power hungry and Microsoft’s Windows 7 is not a good Tablet PC operating system. But now, ExoPC has come up with a similar Slate PC, that runs Windows 7 and does 1080p videos.

For a Tablet/Slate of this kind, playing 1080p videos will be remarkable! Even the Apple iPad can’t play 1080p videos! The specs of the device can be compared to any netbook, except that this device can play 1080p videos. It hosts an Intel Atom Pineview-M N450 at 1.66 GHz with Intel GMA500 chipset which will allow it to be a powerhouse in terms of multimedia. It features an 11.6 inches (1366 x 768 resolution) capacitive display, which is bigger than the iPad’s 9.7 inch display. With 2GB DDR2 RAM, SSD flash storage option of 32 and 64GB, WiFi-N, Bluetooth, SD card reader, USB ports, accelerometer, light sensor and a 1.3 MP webcam, this Tablet PC has what it takes to be the ultimate Slate/Tablet for the PC market.

ExoPC Slate will be powered by Windows 7 Home Premium with a custom proprietary UI called ExoPC UI Layer to go on top of it. It will also feature a custom cloud-based App Store, and will give 5 hours of battery life. 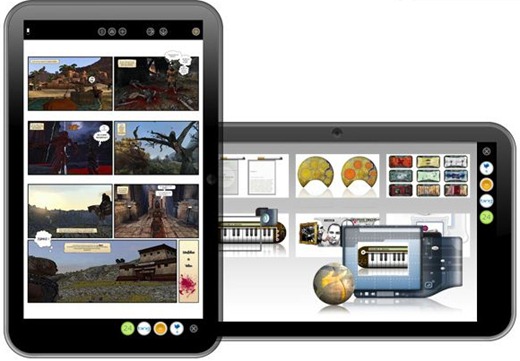 The device will retail for US $599 for the 32GB model in US and Canada on September 7th. Now lets hope that this promising Slate/Tablet actually sees the daylight and not end up like the HP Slate project. [via Engadget]