International Business Times has made a nice comparison of HTC HD2 and iPhone 3GS by pitting the two in a head to head contest. To some extent, they have been successful in rightly proving that HTC HD2 is far superior to iPhone (in terms of hardware anyway). Different aspects of the two like: size, display, camera & video recording, connectivity and wireless connection, OS, processor, music and video, keyboard, storage and memory, power and battery, Price tags and browsing have been compared. The final verdict shows that HD2 wins in 8, where as iPhone in 1, and there are ties on 4 other aspects. 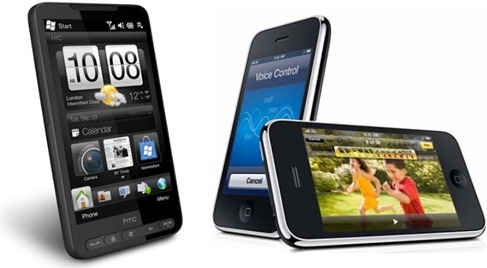 WMPoweruser has summed up the comparison as follows:

HTC HD2 is the first Windows Mobile-based device to do away with a stylus for navigation and control through the functionality built into the apps by HTC. There is still no native support for multi-touch in the OS itself. Infact it is HTC Sense which is super imposed over Windows Mobile 6.5 to make the device look modern(ish) and multi-touch capable. Furthermore, we all know that iPhone is definitely a trendsetter in the world of smart phones when it comes to its multi-touch functionality, App Store etc. It was all very well thought and put together by geniuses’ at Apple almost two years back with the original iPhone. So it will be fair to say that HTC and many others are playing a catch-up game on Apple’s iPhone with certain improvements, rather than introducing something really new of their own.