A video has popped up which shows Nexus One running the upcoming Android 2.2 Froyo update. It is difficult to say whether or not this is really the Android 2.2 (Froyo) update running on the Nexus One, but one thing which we are sure of is that it look different, as also apparent from the screenshot below. Video after the break. 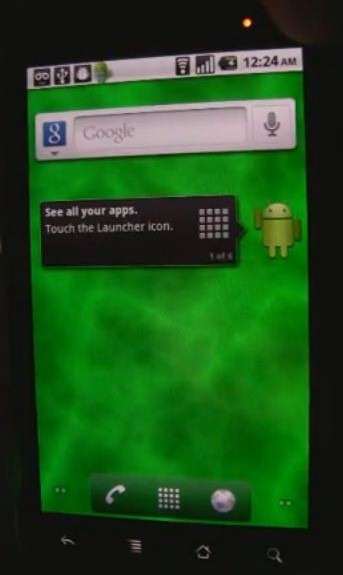 In the video, a user demonstrates different HTML5 content which appears to be running very smoothly on the Nexus One, thanks to it’s powerful hardware. But if you skip the video all the way to 6:31, you’ll notice a very different home screen (with a new launcher) compared to Android 2.1. Could this possibly be the upcoming Android 2.2 (Froyo) update? or is it just a custom-made home screen launcher? In any case, check out the video below and judge it for yourself.

The screen for sure looks different, even the Google search bar looks different along with a widget which appears to be a Launcher icon with an Android logo beside it. If this is really the Android 2.2 firmware, then it must be one of those early builds given to developers for testing purposes. What do you think? [via AndroidSpin]