Nexus One to One-Up iPhone with Flash Player 10.1

Adobe for the last one year or so has been actively involved in developing Flash Player for Android platform. They were quick to show off a demo of Flash Player 10.1 running on the Nexus One following the official announcement of the said phone by Google. Adobe, Google, Qualcomm and HTC are working together to deliver Flash Player on Nexus One in the spring of this year to one up the rival Apple’s iPhone which lacks the Flash Player capabilities since the original iPhone in 2007. 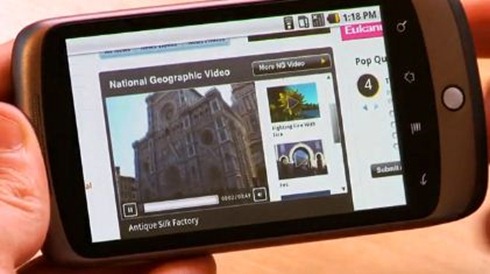 The software which is said to be in beta testing stages will work on almost all Android 2.0+ devices but the experience may not be as smooth as it will be on Nexus One because of the 1Ghz Snapdragon chip, which is a highlight feature of the Nexus One.

In the video shown below, Adrian Ludgwig of the Adobe Flash team demonstrates Flash Player 10.1 on the Google Nexus One, showing off a couple of flash based sites like MiniClip and the official National Geographic’s site with flash-based navigation and ads. The performance of Flash Player on a mobile device at this stage seems pretty decent as can seen in the video embedded below.