Unboxing Nexus One, iPhone 3GS and HTC HD2 Side by Side

Most of you who are either following me on twitter, or are subscribed to our facebook fanpage may already know that I bought Nexus One today and just to make it a bit different, I decided to unbox it side by side with another similarly spec’ed phone – the HTC HD2. Both Nexus One and HTC HD2 are powered by 1Ghz Snapdragon processor. 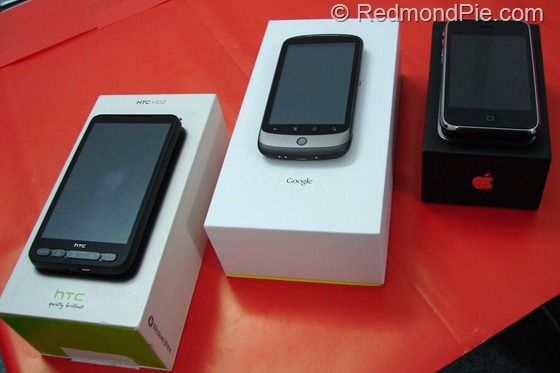 Nexus One has 3.7’’ capacitive AMOLED display which makes everything looks crisp and vivid. It has 512 MB of RAM, 5 megapixel camera with LED flash and it runs on top of Android 2.1. HD2 on the other hand has a massive 4.3’’ capacitive display, 448 MB RAM, 5 megapixel camera with Dual-LED flash and it runs on Windows Mobile 6.5 with HTC Sense experience. Build quality of both the devices is top notch. I have also compared both devices on hardware grounds with iPhone 3GS. Thickness wise, HD2 was the thinner of the two followed by Nexus One and iPhone 3GS.

Here is a two-part video which shows the unboxing and hardware tour of the said devices. I had a slight throat infection due to which I sounded real bad. So please pardon me for that :).