Today is the big day for the Android side of the house. It is today when Google is finally going to unveil its latest darling to take on the iPhones, Droids, Pres and the HD2s of this era. Folks at Engadget, who got their hands on the device before Google’s announcement has put up an excellent review which covers all the pros and cons of the said phone. Their final verdict on the handset hasn’t changed much from a couple of days ago when they first got hold of it. 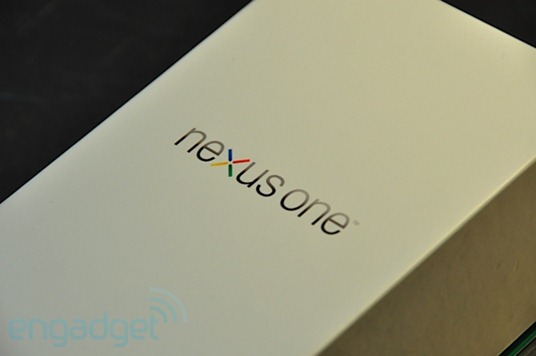 Here is what they have to say about it.

… though, the Nexus One is at its core just another Android smartphone. It’s a particularly good one, don’t get us wrong — certainly up there with the best of its breed — but it’s not in any way the Earth-shattering, paradigm-skewing device the media and community cheerleaders have built it up to be. It’s a good Android phone, but not the last word — in fact, if we had to choose between this phone or the Droid right now, we would lean towards the latter. Of course, if Google’s goal is to spread Android more wide than deep, maybe this is precisely the right phone at the right time: class-leading processor, vibrant display, sexy shell, and just a sprinkling of geekiness that only Google could pull off this effortlessly.

Specs wise, Nexus One is almost as powerful as the HTC HD2, but has a smaller screen (3.7’’ compared to 4.3’’ on HD2), less sexier shell, and a little more ram (512mb compared to 448mb on HD2). It runs on top of Android 2.1 which is still not as dramatically different as the previous Android 2.0.1 version, which runs on the Motorola Droid.

Well the real story is that Android 2.1 is in no way dramatically different than the iteration of the OS which is currently running on the Motorola Droid (2.0.1). In fact, there is so little that’s different in the software here, we were actually surprised. Of the notable changes, many are cosmetic — if there are major underlying differences between this OS and the one on the Droid, we can’t see what they are. Still, there ARE changes, so here’s a peak at just what Google has cooked up for the new phone.

Yes, the phone is faster and looks more stylish when compared to other Android based handsets available today. But it is nothing revolutionary, neither does it bring anything new to the table. The fact that it doesn’t support multitouch functionality doesn’t help its cause. In my opinion, Nexus One, like all others, is still trying to catch up on the original iPhone which was released back in 2007.

Having said that, it wont be wrong to conclude that Nexus One may just be the best distant second alternate to iPhone if Android is your choice of platform.

Let us know what you think about this latest phone by Google, and whether or not you are going to get once it is officially available today.