Good news for all iPhone users, the upcoming iPhone 4.0 will support multitasking in an Expose-like style interface as we have seen on Mac OS X. Now you can switch between apps and perform multiple tasks seamlessly.

The current iPhone OS 3.1.3, and all the earlier ones never supported multitasking (except for a few Apple bundled apps), you had to quit the running app in order to switch on to the next one, unless of course if you are jailbroken. Apple wanted to keep things simple, and so they sacrificed multitasking for Push Notification service. All the other platforms we see around us such as Android, Windows Mobile and Symbian supports multitasking right out of the box, but it does affect the device’s performance and eats away system resources to some extent. 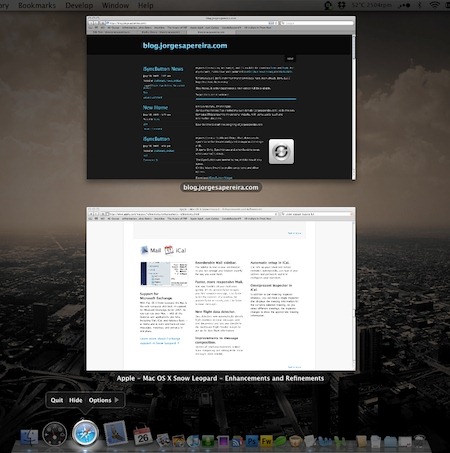 Those who have used a Mac before will be quite familiar with what Expose is. Expose arranges all your running apps on the screen side by side, so it gives you an overview of which apps are running in the background.

Apple is using the same approach with their 4.0 OS firmware for the iPhone. Double tapping the home button will bring up an expose style interface and then you can switch between running apps and perform multiple tasks, it’s that simple!

Multitasking does sounds like an amazing feature but on the other hand it raises security issues as well. An app running in the background can be an open invitation to malware and piracy. Apple ensures that there would be no broken security while the user is multitasking, therefore we can surf the web, use iTunes, without having to fear of an attack on our handset. The news comes from a very reliable source within Apple itself. [via AppleInsider]

The next-gen iPhone along with the new 4.0 firmware is probably going to be unveiled at this year’s WWDC conference. It is expected to feature a faster processor, a display with 940×640 resolution, a 5 megapixel camera with LED flash, support for WiFi-N standard and so on.