With 2017 drawing to a close, all eyes are on 2018 and the flagship smartphones that it will bring to the table. The Galaxy S9 and Galaxy S9+ are two that we expect Samsung to bring to market, and while we do not have confirmation of when that will happen, the smart money is on it being either in January alongside the CES event in Las Vegas, or in February just ahead of Mobile World Congress in Spain.

Whichever of those two time windows turns out to be accurate, we can be pretty sure that the new releases will be impressive.

Ahead of either announcement we have seen a leak courtesy of SlashLeaks which, while no real source is provided, may give us our first real indication of what will go into the new flagship Galaxy devices whenever they may be shown off. Not all of the important numbers are there, so there is still something to look forward to even if the leak is legitimate, but this should give us a feel for what the phones will offer.

According to the leak, we can expect the Galaxy S9 to ship with a screen that measure 5.77 inches which is a size that gets rounded up to 5.8 inches in previous leaks of this ilk. The phone’s CPU is listed as the Snapdragon 845 which would fit in nicely with what we might expect, although the Exynos 9810 is not mentioned. We would expect Samsung’s latest chip to make an appearance in some Galaxy S9 models for sale around the globe. 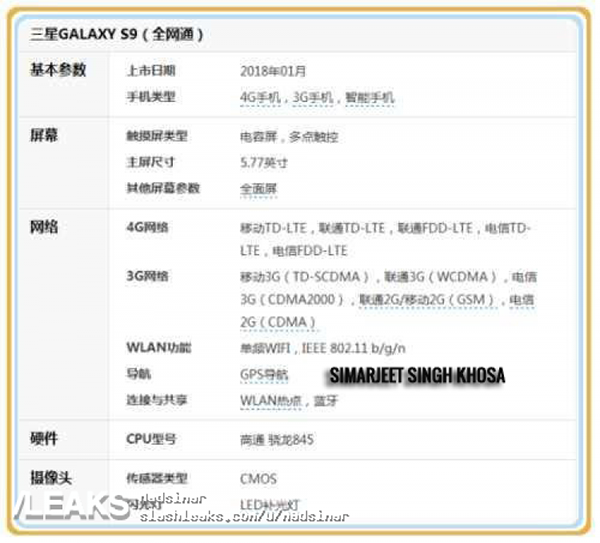 There are plenty of questions still to be asked, with no mention of battery size, memory or what kind of biometric security the new device would use but there is at least some text which again suggests a January announcement window. If that’s the case, we can expect to see the Galaxy S9 sooner rather than later.