Apple has updated its Apple Watch recycling program to start offering variable value gift cards in exchange for Apple Watch hardware traded in as part of the partnership with Brightstar.

The Cupertino-based company had originally started accepting trade-ins of Apple Watch last year on the basis that customers understood it was a free recycling program to dispose of the Apple Watch responsibly. That part of the program has now been updated to offer financial compensation to those trading the hardware in the form of an Apple Store Gift Card.

The Apple watch trade-in process is largely identical to what consumers will be used to if they have ever traded an iPhone or iPad with Apple through the program. They are first of all invited to choose and specify the exact model of the Apple Watch that they wish to trade-in, which is currently limited to the original Apple Watch, Apple Watch Series 2, and the Apple Watch Series 2 Nike+ variant.

Apple and Brightstar are currently not accepting any trade-ins for the latest Apple Watch Series 3 model which comes with both LTE and non-LTE capabilities.

The process then requests the size of the Apple Watch being traded, either 38mm or 42mm, before asking the user five questions about the hardware. These are questions that you would expect to be asked and include whether or not the device has suffered from any water damage, the current condition of the Apple Watch display, whether or not the device actually turns on, and if all of the hardware-based buttons, including the Digital Crown, are in working order. 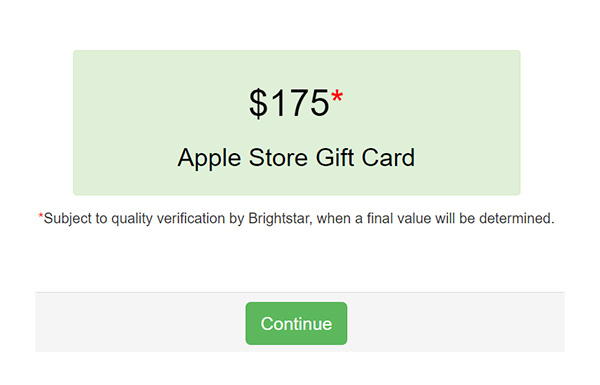 The answer to those questions then determines the value of the gift card offered. The size of the Watch, whether it be 38mm or 42mm, has no effect on the cost and is captured for Apple’s information only.

The value of the gift cards offered varies from $50 for a first-generation Apple Watch Sport in good condition to $175 for a fully-functioning Series 2 Stainless Steel model. If any of the questions are answered with a “No,” then Apple will still take the device off your hands but won’t be offering any gift card compensation, claiming that it “cannot offer any monetary value for your device,” but that it will dispose of the hardware in an environmentally friendly manner.

To get started, visit apple.com/recycling/.