Apple has made available for download tvOS 11.2 and watchOS 4.2 final versions for Apple TV and Apple Watch respectively with immediate effect.

The release means that all Apple TV 4 and Apple TV 4K owners can grab the latest version of tvOS right now, and all Apple Watch owners, even dating back to the original release, can grab watchOS 4.2 and start to benefit from all of the improvements that it offers. 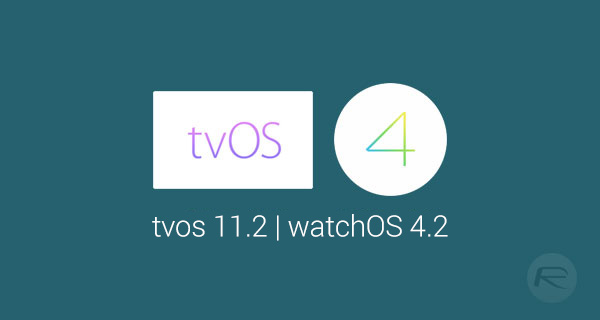 Apple’s release of tvOS 11.2 and watchOS 4.2 come after a period of testing involving the dedicated and enthusiastic Apple Developer community and even involved some public testers who are keen to help out where they can. All feedback and bug reports have been worked on by Apple’s engineers and outputted to the public with the final releases highlighted below.

tvOS 11.2: tvOS is a decent update but it’s one that perhaps is aimed at developers as much as it is for the average Apple TV owner. Apple has stipulated that the release introduces a new AVDisplayManager feature for those third-party developers who are building App Store experiences for Apple TV. There are also some Apple TV 4K-focused improvements with tvOS now supporting automatic display switching to SDR or HDR for apps in use which are GPU-bound. The update also brings back the Unwatched feature in Home Sharing for various media types. Like watchOS below, the rest of the improvements come in the form of stability improvements and fixes behind-the-scenes to ensure an overall positive experience on the big screen.

watchOS 4.2: This isn’t Apple’s biggest watchOS release but it does actually contain enough to make it a fairly enjoyable install. Right off the bat, those installing watchOS 4.2 to any one of Apple’s intelligent Watches will be able to benefit from the new Apple Pay Cash feature which introduces peer-to-peer payments through the Messages app using Apple Pay. Apple has also unlocked this feature for iPhone and iPad with iOS 11.2. Apple Pay Cash is the main feature improvement in watchOS 4.2, with the rest of the improvements appearing to be under-the-hood bug fixes and stability enhancements.

Any Apple TV 4 or Apple TV 4K owner can grab the latest tvOS update right now as an over-the-air download from the Settings app on the Apple TV. Download times for this will vary depending on the Internet connection.

Apple Watch owners can grab the latest version of watchOS through the companion Watch app on iPhone. Apple Watch will need to have at least 50-percent battery and be connected to a power source.