“Unable To Activate Face ID” Bug Rears Head On iPhone X With iOS 11.2 Update, Here’s How To Fix It

Another day, another round of Apple software updates that are aimed at addressing showstopping bugs.

The latest comes in the form of iOS 11.2, which brings new features but also, importantly, appears to have been pushed out ahead of schedule thanks to a fix for a bug that could have seen a number of iPhones and iPads find themselves in a boot loop of sorts.

The reason? Previous versions of iOS 11 did not like the date December 2nd, especially when receiving certain kinds of notifications. However, while one bug is squashed, another appears to be rearing its ugly head, with some users reporting that Face ID no longer works. According to numerous reports on Twitter and other online forums, some users have found that once they updated to iOS 11.2 on an iPhone X, they lost the ability to make use of its headline feature – Face ID. From what we are hearing, users find that Face ID does not work after the update and when entering the Settings app to re-configure it, they are told that Face ID cannot be activated with error prompt “Unable to activate Face ID on this iPhone”.

As of the time of writing this article, the issue seems to be impacting only those users who manually changed the date to an older day to temporarily fix the December 2 date bug on their iPhone X and then updated to iOS 11.2 later. Fortunately though, the fix appears to be very simply, with a simply reboot after the update to iOS 11.2 required in order to fix the problem. You can learn more on how to reboot your iPhone X the right way here: iPhone X Tips: How To Turn Off, Reboot, Hard Reset / Force Restart iPhone X. Also make sure you set the date and time on your iPhone X to automatically in Settings section of iOS. 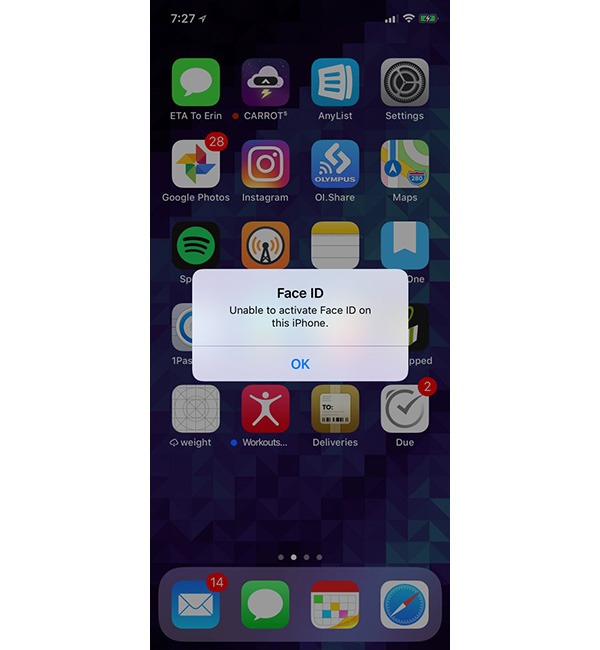 Apple is having a torrid time of it right now, with security issues and showstopping bugs seemingly popping up left and right, whether in iOS or macOS. Long gone are the days of “it just works,” but with so many software issues of late, we do have to wonder what is going on inside Apple’s development teams.