The ability of Touch ID to hold five fingerprints by which users could be authenticated was often used to allow spouses to also have a finger registered, allowing them to access an iPhone or iPad that was not theirs.

A workaround more than an intended use, the registering of multiple people’s fingers on one device has been a practice carried out for years, but with the advent of Face ID, that has all changed, chiefly because only one face can be registered with an iPhone X at any one time.

Granted, we only have one face, but the aforementioned workaround to allow multiple users access to one device is now simply not available, and it’s something many have wondered about – will Apple allow multiple faces to be registered for Face ID in the future? One iPhone user wondered about the possibility so much that he sent an email to Apple’s software engineering chief Craig Federighi to enquire about it. The answer? Don’t hold your breath.

While Apple does know that people gamed Touch ID’s five finger capabilities, Federighi says that this was never the intention when it was designed, with the theory being that it would instead allow people to simply register multiple fingers on their own hands, allowing for left and right handed use etc. Face ID will continue to offer single user authentication for now, although he did not rule out the possibility of Face ID growing to allow multiple faces to be authenticated in the future. Whether that is something on the roadmap for soon or not-so-soon, however, remains to be seen.

While Touch ID still exists on some iPhones, iPads and even MacBook Pros, it is clear that Face ID will be the future of biometric authentication on Apple hardware moving forward. With that in mind, we can only hope that those wishing to continue their multi-user workaround won’t have to wait too long for Face ID to catch up. 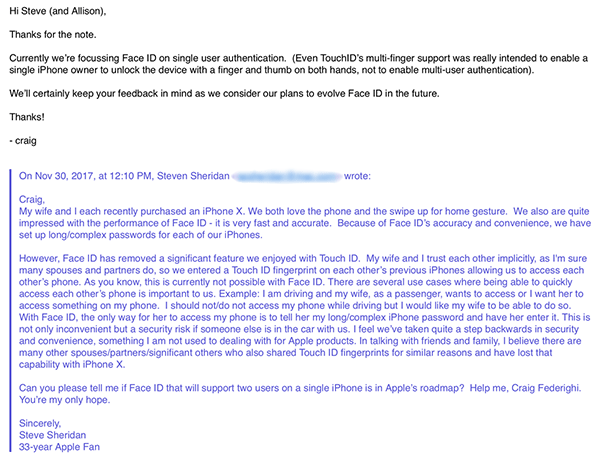