We’re coming to the end of 2017, which means that all of the year’s flagship Android smartphones have already made an appearance and been celebrated. Samsung’s Galaxy S8 and S8+ sat the top of that collection as some of the more impressive releases this year.

In an effort to outdo itself, it seems that Samsung is looking to end the first quarter of 2018 with a bang, with serial leaker Evan Blass suggesting that the introduction of the Galaxy S9 will be a “tock” moment for Samsung.

Taking to Twitter, Evan Blass of the @evleaks Twitter account has confirmed that Samsung is currently working on the Galaxy S9 and S9 Plus under the internal “Project Star” naming convention. The smaller Galaxy S9 carries the SM-G960-Star 1 name, and the larger S9 Plus variant sits with the SM-G965-Star 2 name where SM-G960 and SM-G965 are the model numbers and “Project Star” being the codename. As part of that tweet, Blass has suggested that this will “definitely” be a “tock” year for the South Korean company, referencing the “tick-tock” strategy which sees a substantial change coming with each “tock” release.

Accessory manufacturer Ghostek, which makes gorgeous looking cases for Samsung devices, has also jumped in on the Galaxy S9 and S9 Plus conversation by sharing a number of internally produced renders of the hardware. These renders are said to be based on official specifications and information pertaining to the S9 range as provided by Samsung’s manufacturing partners who are in the process of working on and producing the Galaxy S9 and S9 Plus. Ghostek has also reportedly confirmed a number of things about Samsung’s upcoming hardware.

We already know that Samsung has been working internally on a facial recognition system that it hopes will rival the existence of Face ID on Apple’s iPhone X. The company was hoping that it would be ready for the release of the Galaxy S9 range in March/April of 2018, but the information suggests that the timescales are too tight and that the technology will likely not be ready in time for Galaxy S9. 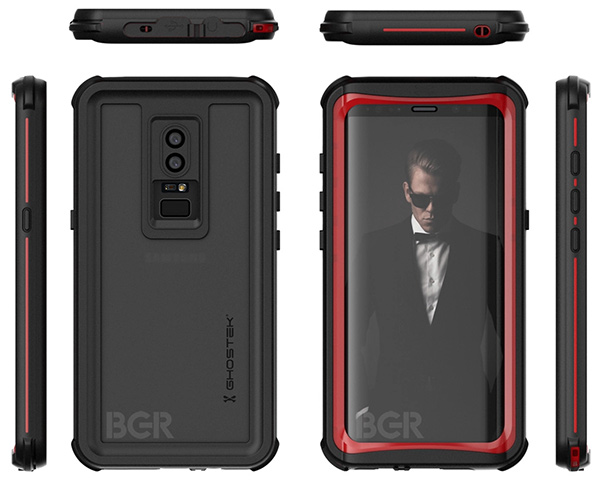 Stepping away from that, the S9 will ship with a dual-lens camera system in a vertical orientation like Apple’s iPhone X, and will still include a fingerprint sensor on the rear of the device.

As always, as and when more information becomes available, we’ll be sure to bring it directly to you.