It now seems like the new iPhone which Engadget got hold of from a bar in San Jose, California was indeed the real deal. Another gadget blog Gizmodo has now got their hands on the handset which they are said to have found from a bar in Redwood City. While we cant say for sure that this is the final design that Apple has zeroed upon, but the likelihood of this being the next-iPhone seems very high now as also confirmed by Apple critic John Gruber of Daring Fireball.

iPhone 3GS on the left, the rumored iPhone 4G/HD on right.

So I called around, and I now believe this is an actual unit from Apple — a unit Apple is very interested in getting back. I am not certain that this looks like the actual production unit Apple in tends to ship to consumers. 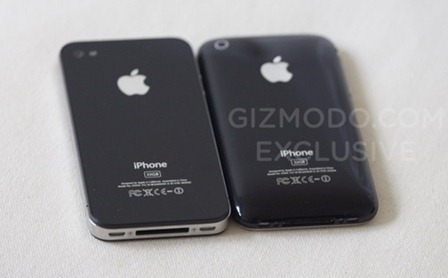 The rumored iPhone 4G/HD on left, iPhone 3GS on the right.

And without any further delay, the findings of Gizmodo are as follows.

• Front-facing video chat camera
• Improved regular back-camera (the lens is quite noticeably larger than the iPhone 3GS)
• Camera flash
• Micro-SIM instead of standard SIM (like the iPad)
• Improved display. It’s unclear if it’s the 960×460 display thrown around before—it certainly looks like it, with the "Connect to iTunes" screen displaying much higher resolution than on a 3GS.
• What looks to be a secondary mic for noise cancellation, at the top, next to the headphone jack
• Split buttons for volume
• Power, mute, and volume buttons are all metallic

• The back is entirely flat, made of either glass (more likely) or shiny plastic in order for the cell signal to poke through. Tapping on the back makes a more hollow and higher pitched sound compared to tapping on the glass on the front/screen, but that could just be the orientation of components inside making for a different sound
• An aluminum border going completely around the outside
• Slightly smaller screen than the 3GS (but seemingly higher resolution)
• Everything is more squared off
• 3 grams heavier
• 16% Larger battery
• Internals components are shrunken, miniaturized and reduced to make room for the larger battery

Here is a short video of it in action.

You can read all the details about it on the source link given below: including lots of images, videos, and more proof of this being the real deal.

The next-generation iPhone, along with iPhone OS 4 are expected to be unveiled this summer, probably on June 22 at the annual WWDC conference. A CDMA version of iPhone on Verizon is also expected to be announced at the same event. [via Gizmodo]