The technology enthusiast site TechnoBuffalo has been tipped by a tipster who has found strong evidences in the latest iPhone OS 4 Beta which hints towards possibility of video chat/calling options coming in the next-generation iPhone. This evidence was found via a process named “iChatAgent”, which is revealed by a $0.99 app named “Free Memory Lite” from the iTunes App Store. 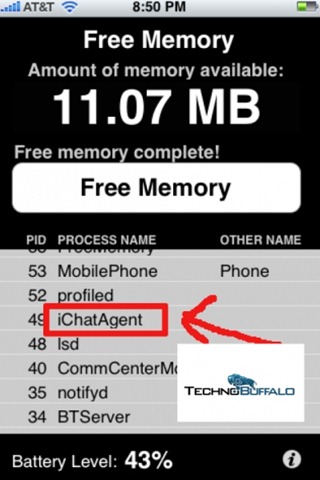 Last month, the iPhone 3.2 SDK for iPad also revealed iChat references in TelephonyUI.framework file which hinted towards the same possibility of video chat coming to future versions of iDevices like iPad and iPhone.

This evidence, along with the Engadget’s-found prototype model of the next-gen iPhone with front-facing cam could very well mean that we will finally have video chat and calling coming to the iPhone. The only question is, will AT&T be able to handle it?, or perhaps Apple has different plans with a CDMA version of iPhone with Verizon? We’ll have all the answers come this June when Apple will finally unveil the next iPhone at WWDC 2010.