A lot of the jailbreak tweaks passing through our radar at the moment are gesture-orientated, and as you may have surmised, our latest feature, Gesturizer, is no exception.

The latest, by developer Conrad Kramer (the guy behind the rather pointless yet extremely fun Graviboard tweak), is a simple yet effective little tweak which enabling any app to be launched or any of the numerous functions found in Activator to be carried out.

Once installed, you need to bring up the app switcher (double tap of the home button unless you’ve manually reassigned it), and you can then enter the gesture of your choice to perform the assigned action to that gesture. You can assign as many different gestures as you like from within the Settings app (there’s no SpringBoard icon), and here’s an snippet of how it looks (this is the gesture I drew to launch the YouTube app): 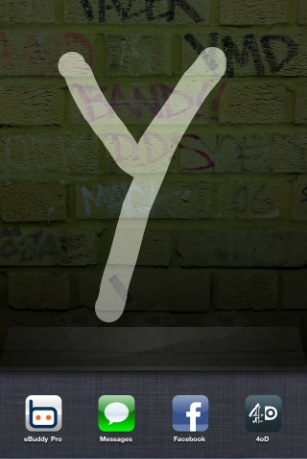 This tweak is especially handy if you’re like me, and have scores of apps which often become tedious to navigate. Moreover, the gestures are fun to use and whilst it’s not exactly James Bond-esque, it will certainly give your device the edge. Unlike some similar apps, which end up causing lag and thus defeating the purpose, Gesturizer is well polished and runs as seamlessly as if it were stock.

If you have caught some of our previous posts covering the likes of LockGestures, RapidContact, and StyleUnlock, then you will have seen the quite broad variety of gesture-centric apps floating around in the Cydia Store. While Gesturizer is probably the best in this category so far, each tweak provides a different set of functions, so if you like the idea of using gestures for pretty much anything, then the above apps are certainly worth checking out.

Gesturizer is compatible with the iPhone, iPad and iPod touch, and the iPad’s larger screen does increase the possibilities for more complex gestures. It costs $2.99 over at the BigBoss repository, which is a default source in Cydia.

In order to begin creating gesture-based shortcuts, you will need a jailbroken iDevice. You can follow our step by step guide posted here to jailbreak your iPhone, iPad or iPod touch on iOS 4.3.5 using Redsn0w (or PwnageTool), or on iOS 4.3.3 using Redsn0w, PwnageTool, Sn0wbreeze or JailbreakMe (that last one being the easiest).