It seems a lot of the tweaks currently being developed through the Cydia Store make use of gestures. This works in the favor of everyday users, as in general, such tweaks help make the iDevice more productive to use, whilst adding a touch of sophistication. 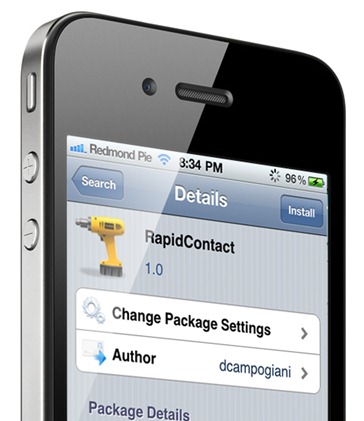 We’ve covered quite a few here at Redmond Pie over the last few weeks. To recap if you didn’t catch them, there was LockGestures, which gives you a useful set of tools of which you can activate by using simple gestures on your lockscreen. You can control music, power, and brightness options as well as launch applications using one of the many gestures available. The developer of that particular app, Akhil Tolani, also came through StyleUnlock, allowing you to unlock your phone using various gestures, check out this post for a detailed overview.

Today we cover yet another useful app which makes the experience of using iOS just that little bit easier. Do you ever want to make a quick call to your boss or your partner, but hate the tedious rigmarole involved in opening your contacts, finding them, and making the call? Or maybe you just want to quickly send someone an SMS, but find the process a bit of a drag? For years and years, phones have had the ability to make quick calls or compose messages using simple commands rather than having to go through the comparatively long process on the iPhone.

Well, help is at hand; RapidContact gives you the ability to make a call or send a text quickly, without the hassle of having activate the SMS or Phone apps. You can pick your gesture through Activator, and when you implement that gesture, you get a screen like so: 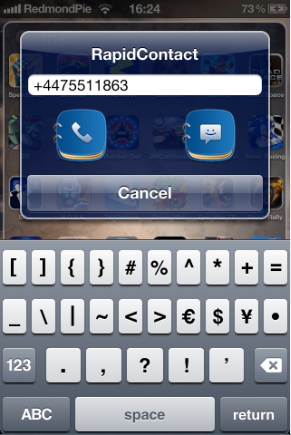 You can change that default sending number in the Settings.app (there is no icon for this tweak), but it’s kind of annoying that you can only set one number as a sort of “favorite” which will always be the default number to call or text. Nonetheless, this app frees up a little time and makes it a lot easier to send a message or make a quick call in a rush.

If you’re a bit of an SMS junkie, you will probably have heard of BiteSMS. One of Cydia’s most popular apps, it gives you the ability to quick compose and make quick calls in an even easier manner, allowing you to shortlist a few favorite contacts to message or call – something which RapidContact lacks. Furthermore, it can be launched in any app, and gives you the ability to send messages without the need to go explicitly into the SMS app. From someone who has used BiteSMS for a while now, RapidContact isn’t in the same league.

That said, BiteSMS will set you back $9.99 for a full license, which is a significant amount, whereas RapidContact is free on the ModMyi repo in Cydia.

In order to get started with RapidContact, you will of course need a jailbroken iPhone. You can follow our step by step guide posted here to jailbreak your iPhone, iPad or iPod touch on iOS 4.3.5 using Redsn0w (or PwnageTool), or on iOS 4.3.3 using Redsn0w, PwnageTool, Sn0wbreeze & JailbreakMe (that last one being the easiest).