Apple and its iPhone were the biggest winners of the second quarter in China, becoming the biggest growing smartphone brand in the country.

According to numbers shared by Counterpoint Research, Apple’s iPhone grew a massive 32% in China during the period while Huawei came in second with 14% growth.

This came after the first quarter saw a decline for Apple’s iPhone of around 60%.

In terms of growth, Apple was the fastest-growing key OEM during the quarter. Despite the market decline, Apple grew an impressive 32% YoY due to the continued popularity of the iPhone 11 series and price cuts. iPhone SE 2020 also quickly entered among the top 3 best-selling iPhones in Q2 2020. June was the best month in terms of smartphone sales so far this year after COVID-19 outbreak driven by surge in sales by Xiaomi (+42% MoM), Huawei (+11%) ” 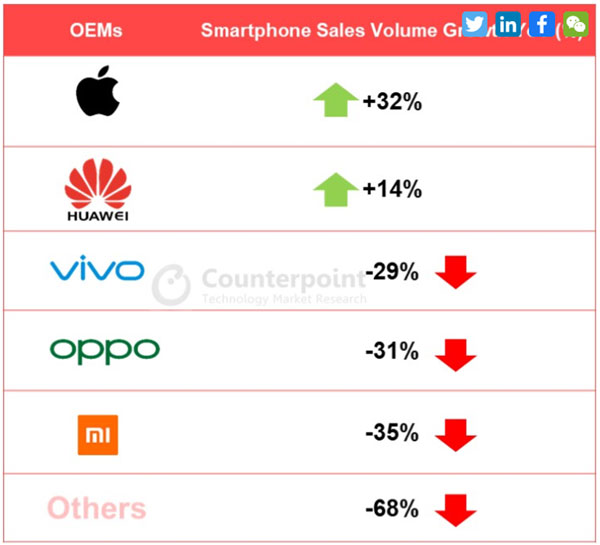 This comes ahead of a new round of iPhone launches this coming September or October. The arrival of new iPhones, accompanied by an easing of the global coronavirus pandemic situation, may see the iPhone grow yet further not just in China but across the globe.