According to new data provided by Counterpoint Research, Apple’s iPhone SE has proven popular among Android users and those with older iPhones despite an overall fall in smartphone sales throughout the United States.

The data for Q2 2020 saw a 25% fall in smartphone sell-through numbers compared with the same period last year, according to the report.

And while things haven’t been great thanks to the coronavirus pandemic, the iPhone SE has been a “bright spot” for the whole market.

Apple volumes grew through the quarter and were especially helped by iPhone SE volumes. The device has been successful and selling above expectations in both postpaid and prepaid channels. Since the iPhone SE launched, carrier stores and national retail have been re-opening. Some channels saw large promos to draw shoppers back to stores. This was especially true within Walmart, Metro by T-Mobile and Boost. Our checks show that iPhone SE sales are unlikely to be cannibalizing fall 5G iPhone sales. iPhone SE buyers are more pragmatic about price, less concerned with 5G, and the smaller display is not considered a hindrance.

The people picking up a new iPhone SE were generally coming from older iPhones, although more than  a quarter were switchers from Android – possibly thanks to the new, low asking price for what is still a very capable handset.

Over 30% of iPhone SE buyers came from using an iPhone 6s or older handset—handsets four years old or older. Over 26% of iPhone SE users moved over from an Android device, which is higher than normal Android to iOS switching. 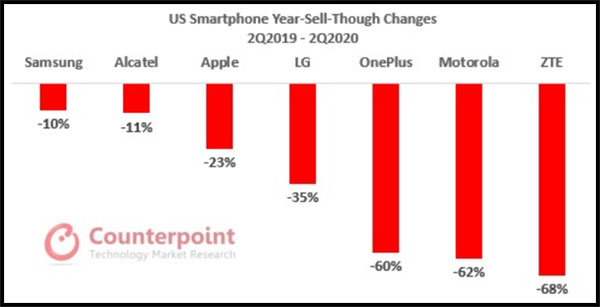 Moving forward Counterpoint thinks that sales likely increased in recent weeks, suggesting that things might be turning a corner after stores were closed across the United States thanks to the pandemic.

This all comes as Apple is set to announce four new iPhones in the next few months and Samsung potentially has the Galaxy Note20 and a new foldable device just around the corner, too.