Sometimes the arrival of new features isn’t the only reason to get excited about a new software update. Sometimes the improvement of existing ones is enough and that’s the situation with watchOS 6.

That’s because when the release lands on the Apple Watch later this year it will fix one of our biggest irritations. No longer will data about your workouts disappear forever once it is dismissed.

Currently anyone who completes a workout will see the information their watch collected. But once the tis dismissed it cannot be retrieved. However, with watchOS 6 installed, it’s been confirmed by 9to5Mac that you’ll be able to see all of that data again in the Activity app.

This will finally see the end of an irritation that should probably have never made it this far, but it did. We’re super pleased to see Apple Watch gain this with watchOS 6 and with many less costly and more basic wearables doing this better it’s good to see progress.

Apple is currently allowing developers to test watchOS 6 ahead of an official release to the public later this year, likely September. Apple is also making builds available to those who have been invited onto its AppleSeed Program, although no actual public beta is available. That’s unlikely to change, too. 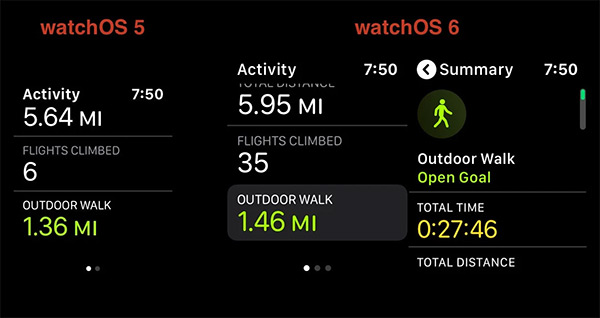 Apple announced watchOS 6 during WWDC earlier this month alongside new versions of iOS, iPadOS, macOS, and tvOS. All updates will arrive around the same time and are currently in the midst of their own beta programs.