There’s been a lot of fuss made about the public beta releases of iOS 13, iPadOS 14, and macOS 10.15 Catalina and it’s easy to see why.

But watchOS 6 is also going through its own beta program with some users now receiving emails asking them to take part in the AppleSeed Program.

While there is no public watchOS 6 beta, Apple does run its AppleSeed Program. In order to become part of that program users must be invited and Apple started to send e mails out to some users yesterday. Anyone who is invited is provided access to special discussion boards and will also receive questionnaires from Apple during their testing.

Because AppleSeed isn’t a public beta, Apple also requires users to adhere to a non-disclosure agreement which isn’t in place otherwise. That means users should not talk about the software or post screenshots to social media although ultimately it’s very difficult for Apple to prevent that form happening.

As with all of Apple’s betas, the AppleSeed Program means users will be running pre-production versions of software on their devices. If you’re one of the people to receive the email we’d suggest thinking long and hard as to whether you want to take the plunge. Especially if your Apple Watch is the one you use daily. 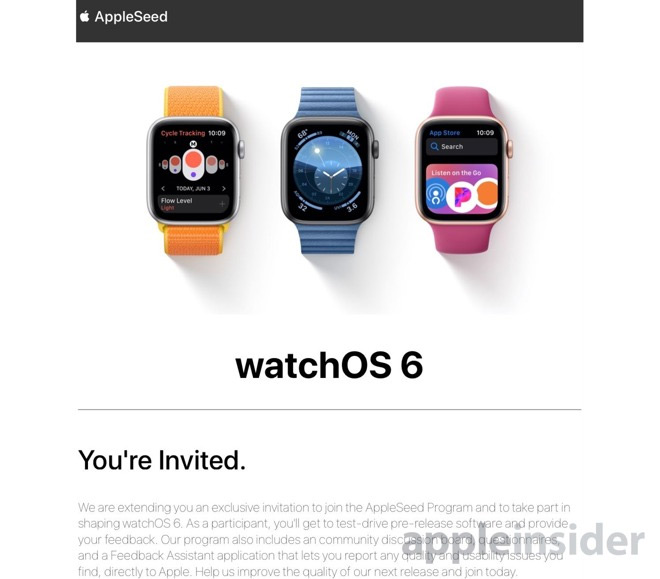 Apple is expected to release iOS 13, iPadOS 13, watchOS 6, tvOS 13, and macOS 10.15 Catalina to the public later this year. Likely in or around September.