The most hyped and anticipated smartphone device has finally landed on the American land on T-Mobile for purchase, the HTC HD2. Get ready to be a part of a large 3G network, kicking off with a phone packed with loads of features and goodies. 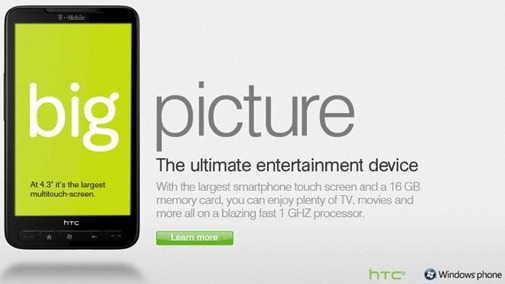 The phone can be purchased now via T-Mobile’s official site as we write. It costs $199 if purchased with a 2 year contract, or for $449 without any contract. The phone is loaded with a lot of goodies and features such as the movie Transformers 1 and 2, 1 month free subscription of MobiTV, 6 months free of Gogo In-flight Internet service, Blockbusters Movie rental app and a lot more!

Everything aside, don’t you think the time for releasing such phone is somewhat awkward? It was released less than 24 hours after the announcement of Sprint’s EVO 4G, and the hype which Windows Phone 7 Series has created. Keep in mind that HD2 is not officially upgradeable to WP7. Buying this phone for a 2 year contract won’t be a smart move, by that time the whole market would be flooded with WP7 Series phones. So are you getting it?