Just found this out on WinMo.nl website and thought it was worthy of a share. What you see here is a HTC HD2 running one of the early builds of Windows Phone 7 Series. According to the site, the build was working nice and smooth and it was shown running on HD2 to the audience in Barcelona present at MWC. 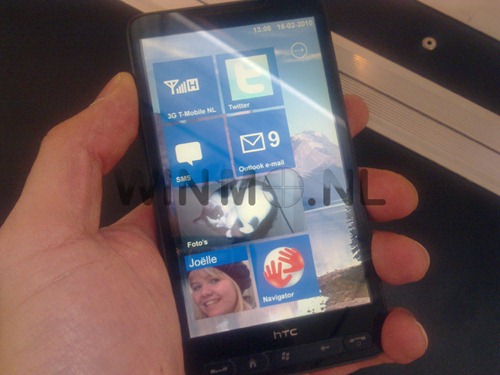 Keep in mind though that such images can easily be Photoshopped to look like the real deal when it is not. HTC HD2 by all means meets all the specs which Microsoft has made mandatory for a Windows Phone 7 Series device including a 1Ghz processor, over 512MB of RAM, a large multitouch capacitive touchscreen and so on. The only hardware requirement which HD2 is missing is the dedicated Bing search button for the device. Currently though, neither Microsoft nor HTC has denied the possibility of Windows Phone OS 7.0 upgrade for HTC HD2. This is what the official Windows Phone account on twitter said about this possible upgrade.

to everyone asking about HD2 & Windows Phone 7 Series; nothing announced yet but there may be info coming next month