Folks over at Modaco forums are working on porting the new HTC Sense experience from the newly released HTC Desire over to the Google-branded Nexus One phone. For those of you who don’t know, HTC Desire was unveiled yesterday by HTC at the Mobile World Congress 2010. Specs wise, this phone is exactly as powerful as the Google phone with 1Ghz processor, 512MB RAM, 3.7’’ AMOLED display and so on. Since it is a HTC branded phone, it comes with a unique HTC Sense experience with exclusive HTC-designed widgets. 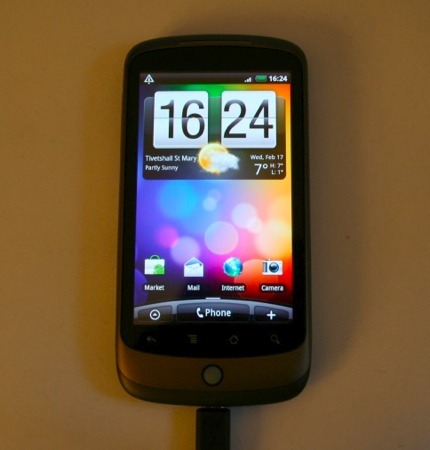 Coming back to the topic, the HTC Desire ROM port for Nexus One is looking good at the moment with most of the stuff working. It also packs Flash 10.1 for Android. Here is a complete log on what is working so far.

– If you rebuild the boot image replacing the kernel it runs. I’m running my own custom kernel with himem and bits.
– The system.img doesn’t fit on the N1 (!), it’s nearly 200MB. I booted by moving some stuff off the system partition.
– The trackball works.
– The 4 bottom keys work.
– The proximity sensor works.
– The LED works.
– The light sensor works.
– The compass and G sensor work.
– The camera works fine and is great with face recognition and touch focus.
– The FM radio loads, but makes no sound / finds no stations it seems. Maybe we need Desire radio ROM?
– The build I have is watermarked – i’ve removed the obvious visual watermarks but no, you can’t have this release – when I get a watermark free drop, yes!
– Flash 10.1 is included and works well.
– It’s FAST!
– WiFi works
– Bluetooth works

This ROM isn’t out yet, but it should be released soon. Stay tuned as we will let you know when it is ready for primetime use. [via Engadget]

UPDATE 1: HTC Desire ROM with HTC Sense for Nexus One is now available. Full step by step instructions on how to install along with download links can be found here.