The upcoming update to HTC Sense UI from HTC Espresso has been ported to run on the popular Motorola Droid phone. Droid, which ships with Android 2.0/2.0.1 has got this plain and simple interface which comes as stock from Android 2.0 OS. But thanks to folks over at AllDroid, you can now get the new Sense UI right on your Motorola Droid. 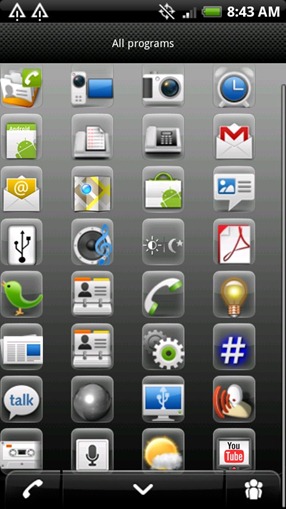 For those of you who don’t know, HTC Sense UI is a feature experience of many HTC Android based phones like HTC Hero and Droid Eris. This upcoming update to HTC Sense UI is going to feature on HTC Espresso and other HTC Android 2.1 phones which are expected to be released in the first half of 2010.

Those of you who are feeling adventurous can go ahead and try this out by heading over to AllDroid forums. We are not to be held responsible if you end up bricking your phone. You’ll need a rooted Droid with Android 2.0 or 2.0.1 to get this to work. Follow the guide posted here to Root your Droid on Android 2.0.1 if you haven’t already.