Nexus One Overclocked to 1.113Ghz; Runs Faster and Stable

Inspired by the overclocking capabilities of the Motorola Droid, folks at XDA-Developers have managed to overclock the most powerful Android phone available today – the Google Nexus One to 1.113Ghz. It is said to be running faster and is stable at this speed. It will be interesting to see how long can these XDA devs push to see the real potential and capabilities of this Qualcomm’s Snapdragon chip. 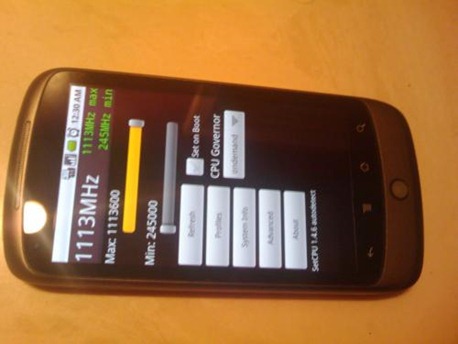 If you are feeling adventurous, follow the steps below to overclock your Nexus One to 1.113Ghz (1113Mhz). Make sure you perform a full nandroid backup first before following any of the steps mentioned below.

Warning Note: Overclocking may result in damage to your phone components, loss of life expectancy, or even frying them. Overclocking is done at your own risk and we take no responsibility for any damage you inflict upon your phone.

Step 1: You’ll need to first unlock your bootloader and then root your Nexus One on the latest Cyanogen rom (5.0.2 as of 2/15/2010). Instructions for rooting and unlocking Nexus One can be found here and here respectively.

Step 4: Download the modded Kernel which is based on Cyanogen Highmem to overclock Nexus One to 1.113Ghz. Download from the source link here.

on command prompt if you are on Windows, and Terminal if on OS X.

Step 6: Once the phone has rebooted, Run SetCPU app and point it to auto-detect your CPU. (Do not choose Nexus from the list)

Step 7: Now set the max clock to the highest level and set it to run on boot.

That’s it! You should now be running Nexus One on higher clock speed, making it faster and snappier than ever before.

UPDATE 1: Nexus One has now been overclocked to 9Ghz. More info can be found here. (Turned out as fake)