If you thought 1.113Ghz (OC) was the max the Snapdragon could do, you were wrong. Android hackers have managed to overclock the Google Nexus One up to 9Ghz, hence making it the fastest clocked smartphone machine available today. 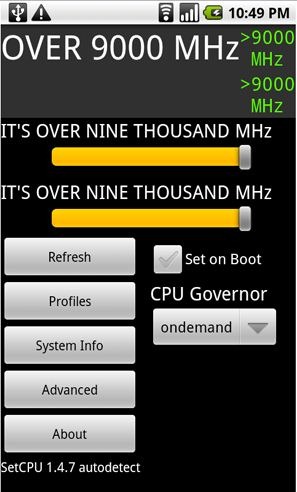 The modded Android 2.1 Kernel with overclocking capabilities hasn’t been released yet, as I suppose it is still under testing. We also don’t know on whether the Nexus One overclocked to 9Ghz was running stable. We’ll let you know as soon as the modded Kernel is available for download. [via Twitter & BlogsDNA]

UPDATE 1: Apologies for taking your hopes up as this one turned out as a hoax, designed to be humorous.