Some Photoshop magic on the Windows Phone logo posters hanging across the streets in Barcelona has unveiled the name “7 Series” underneath the main logo. This hidden name probably refers to the upcoming Windows phone handsets, which will be powered by Windows Mobile 7. 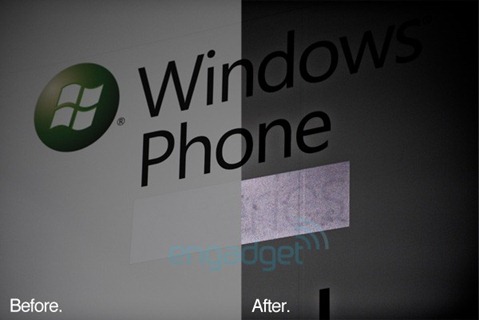 Microsoft obviously is hiding something for the all important announcement which is expected to be made in Steve Ballmer’s keynote address at MWC 2010 (Mobile World Congress). Could the “7 Series” name found underneath the white decals under Windows phone logo refer to the rumored two versions (Business and Consumer) of Windows Mobile 7?, or is it just the branding that Microsoft will use for their Windows Mobile 7 powered handsets? We will for sure know all about this come this Monday when Microsoft will finally unveil their plans for Windows Mobile 7. [via Engadget]