The year 2010 started in a big way with major technology events starting from Google’s Android Conference in January where Nexus One was unveiled. International Consumer Electronics Show was the next to follow where devices like HP TM2 and HP Slate were announced. Then came the BIG Apple Tablet event which was held on January 27th where Steve Jobs announced the much hyped iPad. 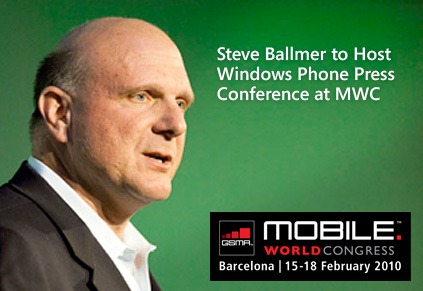 And now is the time for Mobile World Congress 2010 – a platform where major mobile retailers and manufacturers like Nokia, Samsung, HTC, Sony Ericsson and so on announces their upcoming mobile technologies and handsets. Microsoft this year is expected to make their most important mobile announcement in a long time – the Windows Mobile 7, or Windows Phone 7 Series of devices to take on the tough competition coming from the likes of Apple iPhone and Google Android. Microsoft is also expected to unveil Windows Mobile 6.5.3 at the same event.

Microsoft CEO Steve Ballmer will host a press conference at MWC 2010 on February 15 starting at 6 AM PST (Pacific Standard Time). Click here to see what time is it in your region. This conference will be broadcasted LIVE as a webcast and will be available via Microsoft News Center site here.

You can also follow the event via technology sites such as Engadget, istartedsomething and Neowin as they all will be blogging the event LIVE from Barcelona. [via BlogsDNA]

UPDATE 1: Live Video Stream is up, and embedded below: