Snapchat Spectacles Now On Sale In All Colors At Amazon

Snap Inc. has officially put Snapchat Spectacles up on sale in all color variations over at Amazon. Here are the details.

Remember when people used to line up for hours in order to get their hands on Snap’s Spectacles? That was a thing not too long ago, and Snap then followed that up by selling the camera-equipped eyewear directly on its website, but now getting your very own Spectacles is as easy as heading on over to Amazon, where you can now buy Snap’s finest and a bottle of milk at the same time.

Available with next day delivery and in all three colors – teal, coral and black – Snap’s Spectacles will set you back the standard £129.99 and while they are officially sold by Snap, they are fulfilled by Amazon, meaning they will be shipped direct from one of its many. many warehouses.

Snap’s Spectacles took an a life of their own when they were first sold via a number of seemingly random popup shops across the United States. Getting a pair of them onto your face was no mean feat, and for a while Spectacles were the must have accessory for the new crowd of online celebrities. Now anyone with an Amazon account and $130 to their name can also get in on the action. Snap’s Spectacles allow the wearer to record video of anything from 10 to 30 seconds long, with that video then available to be posted either to Snapchat or any other video sharing site or app such as Instagram or Facebook. 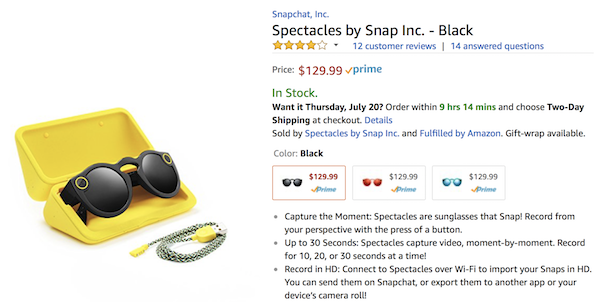 The idea of Spectacles being able to record exactly what their wearer is seeing is the real benefit here, and although it is widely believed that there are a relatively small number of them being worn right now, a deal which sees them available via Amazon can only improve their popularity.