Say Hello To Snapchat’s Spectacles, The $130 Glasses With Built-In Camera

Snapchat has finally transitioned into being more than just a software business with the announcement of the company’s first wearable called ‘Spectacles’ glasses. 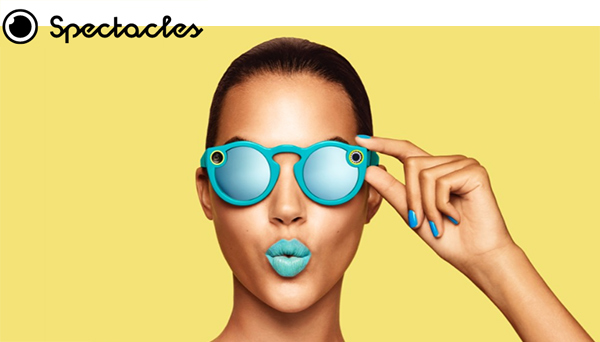 The glasses will come with a tap button located near the hinge, which when tapped will instantly set about recording 10-seconds of first-person footage based on what the wearer is actually looking at. That video is then instantly synchronized with a connected smartphone, and can then presumably be uploaded to Snapchat to show the footage with a connected network of friends.

The capture is handled by a 115-degree-angle lens on the Spectacles, which has purposely been designed to be wider than the lens found in average smartphones as part of an effort to mimic the human eye as closely as possible. The Spectacles will however record circular videos instead of the contemporary boxed ones, which according to Spiegel is something that should be left in the history books. As for keeping the glasses powered up, they will be charged in their own dedicated case. There’s also a light on the wearable which lights up when recording.

Spiegel’s take on this new wearable is interesting for a number of reasons; one being the fact that Spectacles has actually been in development for a number of years without falling into the public domain. It also seems that Spiegel has been a large driving force behind the design of the hardware, with a large emphasis placed on recording moments as captured by the human eye.

Snapchat, or Snap, Inc, as the company is now known, is rolling Spectacles out with limited distribution in the first instance as the company tries to find out if the hardware fits into people’s lives. The wearable is poised to be available in the three colors, Cyan, Red, and Black.

Would you take the opportunity to grab a pair of Snap, Inc Spectacles priced at $130 when they go on sale this fall? Check out the video embedded below and let us know what you think about this new contraption.