SIM-Free Unlocked iPhone X Model Now Available In The U.S., Here’s What You Need To Know

Finally. Just ahead of the Christmas holidays, Apple has launched SIM-free unlocked iPhone X model in the U.S.

The SIM-free model of iPhone X has arrived in the U.S. market almost a month after the company initially launched the handset in the U.S. and other markets.

While the iPhone X sold from Apple Stores in the U.S. comes unlocked when bought outright for full price no matter which carrier variant you buy it, the SIM-free model is the “truly” unlocked model with support for more wider range of bands not only nationally, but internationally as well. Unlike the carrier specific models, as the name suggests, the SIM-free model doesn’t come with any carrier SIM as well.

Apple’s official explanation of SIM-free iPhone model is as follows:

“SIM-free” means your iPhone doesn’t ship with a carrier SIM card. The SIM-free iPhone sold on apple.com and at the Apple Store is unlocked. That means you’re free to use a SIM card from any carrier that provides service for iPhone.

While internationally, Apple has always launched SIM-free model of iPhones (including iPhone X) on day 1, but because of the carrier situation in the U.S., SIM-free model in the States almost always arrives a month or two after the initial launch. 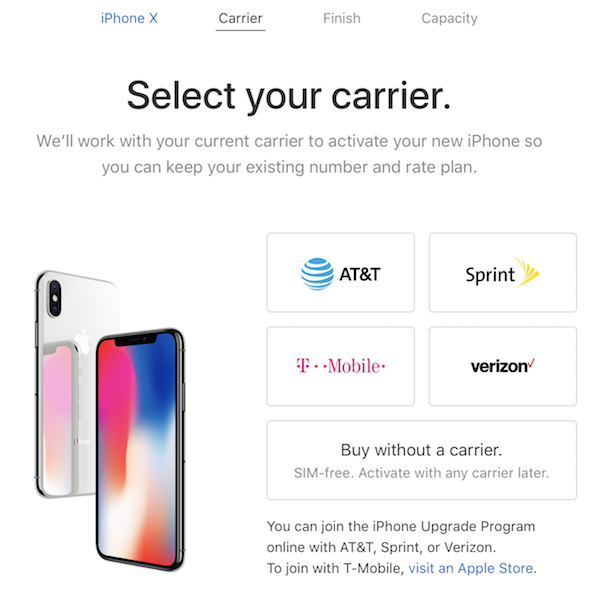 If you head over to the apple.com’s iPhone section, when buying the iPhone X, you will now be presented with a fifth SIM-free “Buy without a carrier” option alongside the usual AT&T, Verizon, T-Mobile and Sprint models.

If bought today, the SIM-free version of iPhone X will ship in a week time from now, just like all other variants of iPhone X.