There has been plenty going on in the world of PS4 hacking of late, and now we have the latest news that will be music to the ears of those who have held out hope of a PS4 jailbreak coming to the platform.

Hacker Luca Todesco has announced that he has been able to hack the latest version of the PS4’s software – version 5.0, which was released just a few weeks ago.

While there was an exploit that worked on older versions of the PS4’s software, this is the first that will work on the latest release. Luca, or qwertyoruiop, was involved in the hacking of PS4 software version 1.76, which led to a jailbreak years ago and he is now once more at the forefront of the hacking attempts.

It had been rumored that version 5.0 of the PS4’s software was susceptible to the same exploit as earlier releases, and it would appear that this may have allowed Luca to get into version 5.0 today. The exploit, which worked on version 4.55, appears to still be present.

With the possibility of running homebrew applications on existing and future versions of the PS4’s software and the latest news that version 5.0 has been hacked, we continue to edge closer to the possibility of a jailbreak being made available once again. Jailbreaking would allow the running of non-standard code that has not been signed, potentially opening the door for all manner of software implementations that could turn the PS4 from a home entertainment system within a walled garden into a powerful computer capable of running all kinds of applications. 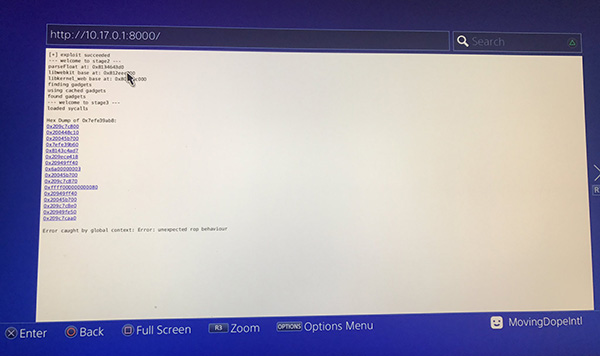 There are still hurdles to be navigated, but things have never looked more rosey in the world of PS4 hacking.