You can now download iOS 11.1 beta 3 IPSW links and OTA for testing purposes on your compatible iPhone, iPad, and iPod touch devices after Apple made it available today.

The company’s latest pre-release seed is currently available with immediate effect for those registered with the Apple Developer Program and instantly ensures that the Cupertino-based company can continue the progression of iOS 11’s first major update. 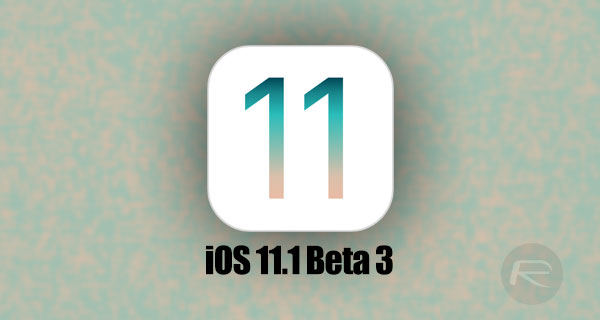 Registered developers, as well as those who choose to enroll in the Apple Beta Software Program, are becoming increasingly used to these continuous pre-release updates to feast their eyes on. It seems that it’s becoming the norm now for Tim Cook’s and Co. to constantly have a specific version of iOS in test, whether that be an update like this iOS 11.1 release or a smaller .0.x point update which can sometimes go out to test, or sometimes just be issued as impromptu public updates. Given the fact that iOS 11.1 will likely ship pre-installed on iPhone X, it’s very important that Apple puts it through its paces in the correct manner involving the correct people.

Apple typically releases a changelog with new beta versions, but history has shown us that even the release notes aren’t as granular or verbose as we would like, meaning that we can’t always get an instant understanding of what has been worked on, fixed, or improved by Apple’s iOS engineers.

Still, a lot of the time, those developers putting it through its paces are generally concerned with how their own apps and experiences work when running against the new version, so they typically aren’t always concerned with the granular details.

We do however know that iOS 11.1 contains a whole heap of stunning new emoji characters and will be instantly available to adorn messaging conversations when it finally drops later this month to everyone.

In addition to those glorious new emoji, Apple has also been working on fixing a number of niggles and issue with audio, certificate-based authentication, and trying to rectify an issue with its brand new framework, ARKit. If you are part of the Apple Developer Program and are involved in the testing of iOS 11.1, then make sure that you grab the update as an over-the-air update right now from Settings > General > Software Update.

We will update and inform you when Apple seeds the same build as public beta to those registered on Apple Beta Software Program. Stay tuned.