Apple has officially flicked the switch on the next pre-release seed of the firmware belonging to a number of its major hardware platforms.

The Cupertino-based company has made available to download macOS 10.3.1 beta 3, tvOS 11.1 beta 3, and watchOS 4.1 beta 3 with immediate effect. All of the third betas of the previously mentioned platforms are available for compatible Mac, Apple TV, and Apple Watch hardware, and are available to all registered developers right now. 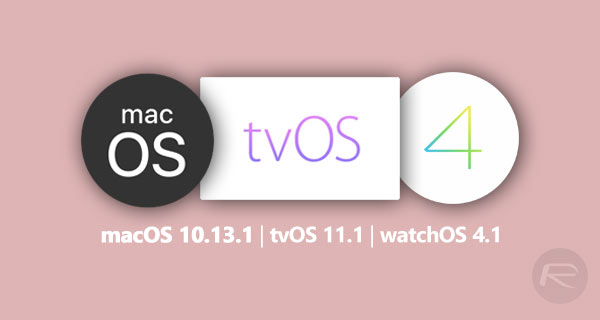 macOS 10.13.1 beta 3: The majority of individuals with a Mac have already considered macOS High Sierra to be a success and to be the perfect replacement to carry on from where Sierra left off. That’s why macOS 10.3.1 is a welcome addition, acting as a point update which continues the progress of the platform and hopefully makes the operating system a nicer experience across all compatible Macs. Among the usual under-the-hood improvements, macOS 10.13.1 also brings in hundreds of new emojis like iOS 11.1.

Apple is continually taking every opportunity to get as many builds out as possible prior to getting macOS 10.3.1 in front of the actual public. Those with the correct developer privileges can grab the latest update from the Updates section of the Mac App Store right now. If you’re new to developer betas, head over to developer.apple.com to get started.

tvOS 11.1 beta 3: tvOS 11.1 may be a continuation of what was started with tvOS 11, and it may be applicable to both fourth and fifth-generation Apple TV units, but we are all fairly certain that this release is predominantly about supporting the brand new Apple TV 4K. With Apple’s new 4K Apple TV flying off shelves, it’s imperative that the software is capable of handling user requirements.

For those who are already running an earlier beta of tvOS 11.1, this version can be grabbed from the settings menu of Apple TV which has a configuration profile of tvOS beta already installed. If this is the first time you are downloading and installing the developer beta of tvOS, simply head over to developer.apple.com to get started

watchOS 4.1 beta 3: If tvOS 11.1 is likely all about smoothing Apple TV 4K experience, then watchOS 4.1 is likely all about smoothing out the Apple Watch Series 3 experience, which comes complete with LTE capabilities. Apple has been extremely eager to get watchOS 4.1 out into the public domain and have it tested by developers, and this is yet another opportunity for that to happen. watchOS 4.1 brings in ability for Apple Watch Series 3 owners to stream full Apple Music library over LTE independent of iPhone, new emoji support like in iOS 11.1, new Radio app, among other under-the-hood improvements.

The third beta of watchOS 4.1 is available to registered developers via developer.apple.com. For those who are already running a beta version of watchOS, it’s possible to run the ‘Update’ functionality from the companion Watch app on the connected iPhone.