Check out this speed test video of one year old iPhone 7 Plus which beats all latest flagship Android smartphones of 2017, including the Galaxy Note 8 and Galaxy S8+.

All the attention in the smartphone right now is on Apple and the impending announcement of no fewer than three new iPhone models. With the iPhone X, iPhone 8 and iPhone 8 Plus all set to be announced during a media event on September 12th, there is so much to look forward to, but it can be easy to forget that even without Apple’s new phones on the market, there are plenty of excellent smartphones around. 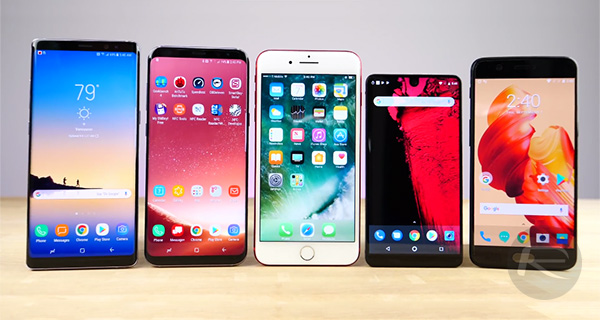 Samsung alone has launched multiple flagship phones in the past few months, and that is before you factor in offerings from the likes of Essential and OnePlus. With so many excellent phones to choose from and new iPhones on the horizon, wouldn’t it be interesting to see how the iPhone we were waiting for this time last year fares against the new hotness?

As it turns out, it would be very interesting indeed. That’s why EverythingApplePro set about creating a video in which an iPhone 7 Plus is pitted against Samsung’s Galaxy Note 8 and Galaxy S8+, an Essential Phone and a OnePlus 5. Just how well will the year-old iPhone 7 Plus stack up to the biggest and best the competition has to offer?

Well, you’ll need to watch the whole ten-minute video in order to get the full lowdown but the short version is that it stands up surprisingly well. In fact, there are plenty of tests carried out by EverythingApplePro during which the Apple device performs much better than newer, costlier handsets despite being an year old at this point.

That alone is impressive, so be sure to check out the video to see just how well Apple’s iPhone 7 Plus handles current flagship devices when doing things like restarting, launching graphics intensive games and the like. You may be surprised or, if you have seen similar videos like this in the past, you might not be surprised at all!