It likely won’t come as a huge shock to most, but once again it seems that Apple’s proprietary hardware/software combination reigns supreme with the one-year old iPhone 7 Plus beating Samsung’s recently announced Galaxy Note 8 in a real-world speed test. 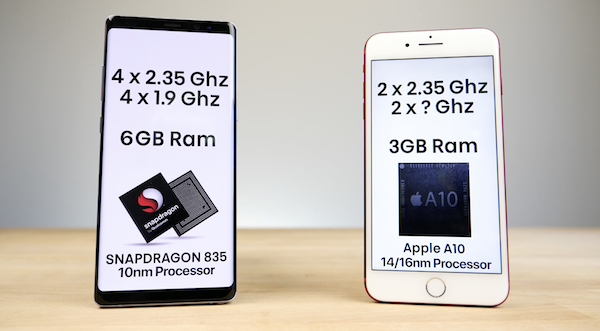 It’s that exciting time of the year again when manufacturers are falling over themselves to not only announce their new flagships in front of a captive audience at dedicated media events, but to also do their utmost to get that hardware into the hands of as many users as possible. Samsung has recently lifted the covers off of its gorgeous new Android-powered Galaxy Note 8 smartphone to glorious applause from the public, but we don’t think executives at the Korean company will want to watch this latest video by YouTuber EverythingApplePro which shows Apple’s iPhone 7 Plus beating the new Samsung flagship in a speed test.

The video starts off as you would generally expect. With all apps removed from the multitasking switcher, it becomes a process of invoking a number of standard apps against a timer running in the background. Apps include offerings such as Snapchat, PS Express, and Instagram, as well as visually intensive games such as Asphalt and Grand Theft Auto which both take a lot of processing power and internal effort to render and load up. Samsung’s Galaxy Note 8 was holding its own up until that point where it started to fall behind Apple’s iPhone 7 Plus which powered through the loading of the games with minimal fuss.

And Apple’s hardware goes from strength-to-strength at that point, pulling ahead of its competition. Apple’s iPhone 7 Plus managed to load all apps up initially, and then from the background, in a time of three minutes and twenty one seconds. Samsung’s Galaxy Note 8 completed the course approximately one minute forty seconds below, completing the course in five minutes and six seconds.

It is worth noting that in this speed test, Galaxy Note 8 was running at its default 1080p resolution, which is same as iPhone 7 Plus, even though Samsung’s Note 8 is capable of ramping up to QHD resolution. Setting higher resolution on Note 8 could have made things even more worse for Samsung’s device.

Having said that, the speed test also included benchmarks comparison, as well as apps being invoked in a like-for-like state side-by-side, where it was clearly evident that the 6GB of RAM in Note 8 has made a huge difference as in this particular test you could see just how much progress has been made with Samsung’s device when compared to Galaxy S8 released in Spring of this year.

You can watch the full speed test in the video embedded below.

With iPhone 7 Plus being an year old device now, and iPhone 8 only a few days away from release, it will be interesting to see how Note 8 performs when compared with Apple’s latest 2017 flagship.