Samsung Galaxy Note 8 specs, release date and US / UK price has been announced. Here’s everything you need to know about it.

Samsung has finally started the bounce back from the damage caused with the Galaxy Note 7 by announcing its replacement, the Note 8, during a dedicated media event in New York. The announcement comes after months of speculation about whether or not there would ever be another Note device after the Note 7 went through a period of spontaneously combusting, but numerous leaks up until this date, as well as the now official confirmation from Samsung, has ensured that the range will definitely live to see another day.

As is always the case with smartphones and tablets of this caliber, the last few weeks have seen a number of leaks drop into the public domain revealing potential information about the Note 8 hardware. That’s all well and good when a device has yet to be officially announced, but we’ve now got the lowdown directly from Samsung, which means we know everything that we need to do about the new Note 8 hardware. The first area of consideration is the aesthetic design of the hardware. The Note 8, as expected, takes a lot of design inspiration from the extremely successful S8 and S8+ with the same stunning Infinity Display that looks to dominate the front of the hardware with very few bezels around the panel.

You also get a little lost in the beauty of the display when you consider that it is 6.3-inch in size, offers an 18:9 aspect ratio, and has that Super AMOLED experience at 2960-by-1440 pixels.

Under that display, Samsung has packed in a Qualcomm Snapdragon 835 processor with an upgrade to a whopping 6GB of RAM. Those components will work alongside an internal storage capacity of 64GB / 128GB / 256GB, which is, of course, expandable with the insertion of an external memory card. Samsung has also hopefully overcome any battery woes that it had with the previous Note 7 hardware to include a 3,300mAh battery pack, and there’s also USB-C and fast as well as wireless charging as we would expect from a Samsung device.

Like S8, Note 8 also features a dedicated button for Bixby, supports DeX, as well as retina and fingerprint scanner for unlocking the device.

The overall hardware aspect of the device is finished off with the integration of iPhone 7 Plus-like dual-lens camera system on the rear, packing in two 12-megapixel sensors, one of which is a standard wide-angle sensor and the other is a telephoto lens and is responsible for providing Note 8 with iPhone 7 Plus-like 2x optical zoom as well as Apple’s Portrait Mode which Samsung is calling Live Focus. The difference between Samsung’s and Apple’s version is that Samsung is letting users adjust the blur effect during and after the shot is taken. The front-facing camera on the other hand is wide-angle 8MP shooter for all those selfies.

As for S Pen, it packs a host of improvements and new features. Some of which happens to be Live message, Screen off memo + pin to AOD, Smart select, and more. 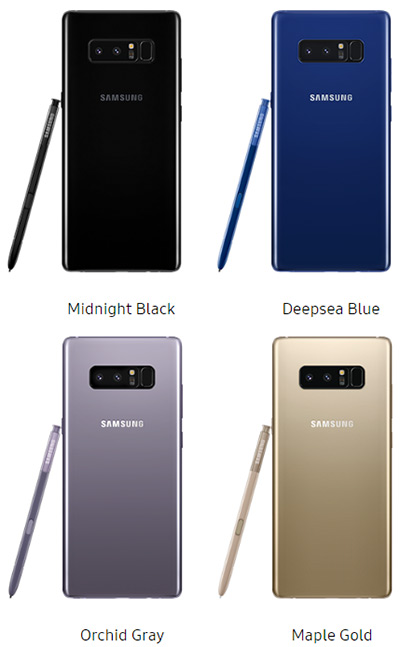 The phablet will hit retail shelves on September 15 and will be available in the following colors: Midnight Black, Orchid Gray, Maple Gold, and Deep Sea Blue.

Complete specs and features of the Note 8 can be seen below.