We already have a fairly good understanding and expectation of what Apple is going to announce from an iPhone 8 perspective during its official media event next month.

With features and aesthetic design in the bag, Chinese source GeekBar on Weibo – which comes with a fairly decent track record – is focusing on the potential storage capacities of Apple’s iPhone 8, suggesting that the Cupertino-based behemoth will go to market with three storage options.

The source providing this information is suggesting that Apple will double the storage capacity of the base entry-level device by offering users a 64GB iPhone 8. Apple will then look to miss out a 128GB option by providing users with a 256GB capacity, and then finally a device which is entirely new to the iPhone lineup offering a staggering 512GB of onboard storage space, which will be first for any smartphone on the market.

The source further claims that the 64GB and 256GB storage chips will be provided by Toshiba and SanDisk, while the 512GB chips will be coming in from Samsung and Hynix. More so, a photo of an alleged 64GB storage chip by SanDisk meant for the iPhone 8 has also been leaked.

There is really no doubting that each iPhone 8 device, regardless of the storage capacity, will cost a pretty penny, but if the 512GB option does materialize then the cost will likely be eye-watering. It shouldn’t come as any great surprise that Apple could potentially double up on storage space from 32GB to 64GB for the entry-level hardware in the new lineup. It’s already been well documented that iPhone 7s and iPhone 8 users will likely have that luxury, and it means that the new iPhone range will instantly fall in line with the 2017 iPad Pro which already sits at 64GB for the base model and also has 256GB and 512GB storage options. 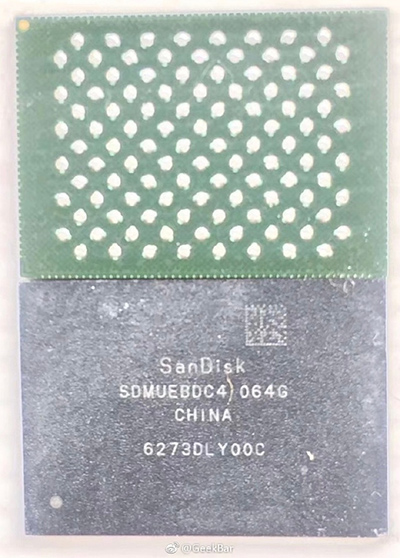 The real meat in this claim comes from the suggestion that those who are willing to part with a ton of cash will be able to have an iPhone, offering 512GB of storage as a high-end option. The existence of a 512GB iPhone is exciting, but not entirely unexpected. As mentioned earlier, those invested in the iOS ecosystem can pick up iPad Pro with 512GB on board, and given the fact that consumers are storing more and more content and the fact that 4K movies are said to be coming to iTunes very soon, it makes perfect sense that Apple would try and converge the two “Pro” lines by offering this high-end version of iPhone 8.

Apple is expected to announce and hold a dedicated media event in early to mid September to introduce the next-generation iPhone, which means we really don’t have long to wait now.